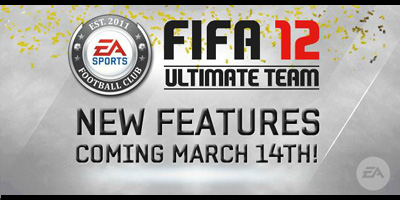 EA Sports will release an update patch that will mainly update the EAS FC & Ultimate Team features and finally fix the disconnection error for the PS3 & PC users in UT & EAS FC!The update will be available on 13th March on Xbox 360 globally and on PlayStation 3 in North America, and on 14th March on PlayStation 3 in Europe and the rest of the world!Bellow we have the full list of the updates and the bugs that got fixed:

Ending the End-Of-Game Disconnects
For some time now, a number of FUT gamers on PlayStation 3 and PC have suffered disconnections at the end of games. This was a problem associated with certain types of router hardware that resulted in very small but very important bits of data being blocked at the conclusion of a game.

We will be deploying a fix for this problem as part of this update.

Since those who were affected most severely suffered a serious degradation of their game experience, we will also be compensating those people with a haul of FUT content significant enough to demonstrate just how thankful we are for sticking with us while we tackled the problem.

Team of the Week

Additionally, the update to the game will coincide with an upgrade for the FUT Web App. This work will require that the Web App is taken offline during the deployment of the update. We expect that the Web App will be offline from 12th March at around 7am GMT until approximately the same time on 16th March.

Your Security Is Paramount

We’re committed to doing everything we can in our game to help keep you safe from phishers and scammers, and our March game update is key part of that commitment:

While these measures will certainly make life much more difficult for those attempting to compromise others’ accounts, it’s still vitally important that you protect your information.