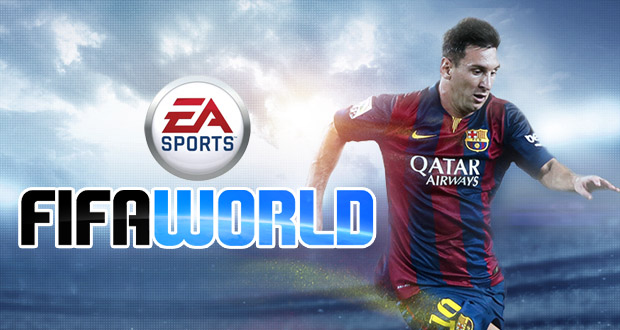 The biggest update in the history of FIFA World is now live! The 9.0 update features a completly new game engine with gameplay innovations that makes it even easier to play like a pro, with new skill moves, more realistic goals, fluid control, smarter teammates, new free kick controls, tactical selection options and much more. To complement gameplay improvements, FIFA World has a whole new look, from a new User Interface to Match Presentation. There is a lot more to discover, FIFA World is a whole new game after R9.0!

Your teammates will now make smarter attacking runs to give you better passing options. In addition, your attacking players have improved offside awareness, they will stutter step or curve their runs to stay onside.

We improved our Face Up Dribble to be more authentic and useful, giving you a better feel when taking on your opponent one-on-one. We also added the Precision 2.0 dribble to keep the ball close to your feet when you attack.

A new system eliminates near-perfect control for every player by creating uncertainty when receiving difficult balls. Poor passes are harder to control, enabling defenders to capitalize on errant balls and poor touches. Variables such as defensive pressure, trajectory of the ball, and velocity of the pass all factor into a player’s success.

You can now add a 2nd and 3rd Kick taker to direct free kicks. There are plenty of combinations to score fantastic goals from this type of set piece. On the defensive side we counter-balance this by adding the wall rush, wall creep and the ability to add/subtract players.

You asked for more and we’re giving you more! New skill moves will help you get past defenders with style. Score a goal and you will have new ways to celebrate!

You can now bring up 4 quick tactics in the game: CB Rush, Team Pressing, Swap Wings and Offside Trap.

Almost 2000 new gameplay animations have been added, giving you more variation with everything you do in a match.

We completely reinvented this control scheme by adding a more sophisticated system that makes even easier for beginners. For experienced players, we added a lot more options to Keyboard & Mouse controls, such as Pass and Go and Fancy Passes.

New look for the User Interface

From the very first menu, FIFA World will look like a whole new game! The game now features a new, modernized look for the U.I.

Yet another visual improvement makes its way into FIFA World with a whole new match presentation.

Imported from FIFA 15, the match commentary has been updated for all languages, giving matchplay an authentic and up-to-date feel.

Fans in Italy can now enjoy FIFA World in Italian, bringing the total number of available languages to 10!

– Game will sometimes crash after winning a season

– The squad screen is not loaded in the Match Invite flow

– Users are sometimes unable to start a match invite

– The game sometimes closes soon after starting it with no error message.

– Users will get disconnected, when first trying to matchmake in an online mode, while in the Squad Reveal screen

– If the user is clicking on a player item, to open the Action Menu, the game will sometimes crash.

– If a user minimizes the title when he is in search on League Teams, the game will sometimes hang

– If one of the users presses Alt + F4 in the pre-match screen of a match invite, the other user remains in a hang

– Run overs are not functioning correctly for classic controls

– The change of kick takers at free kicks is too quick with classic controls.

– The chip shot modifier is not performing correctly with classic controls

– The finesse shot input is not performing correctly with classic controls

– The user is unable to perform a bouncing lob pass correctly with the classic controller.

– After winning Division 1, the user isn’t allowed to choose another season

– AI defenders are sidestepping when marking because a false facing angle

– Switching between Origin accounts resets the control settings of the previous account used.

– Users are sometimes unable to connect to an opponent while searching for a match.

– TOTW showing as Completed when current challenge has not been attempted

– The timer for making substations does not decrease after the extra time in a FUT Invite match.

– All Season 2015 managers are missing their photo

– The game sometimes remains stuck in the half time replay NIS

– In “Transfer List”, the user is unable to switch to the next page

– When user opens the leaderboards menu in League Teams, a Nonfatal error message will appear

– The “Your connection to your opponent has been lost” pop-up is appearing only for a split second and the game will automatically leave the lost session.

– The user can substitute a red carded player

– Users are unable to share media on FIFA World

– Accomplishments completed percentage is incorrect after redeeming a reward

Leave your thoughts on the new update in the comment box bellow!