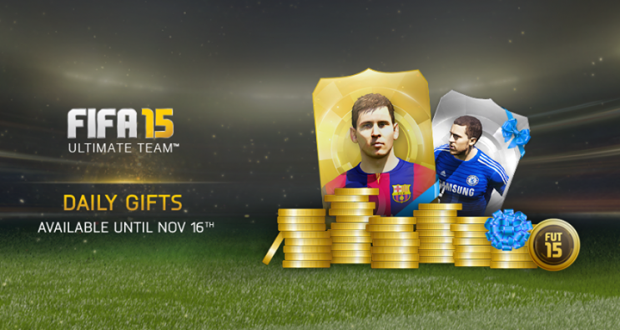 Two new clubs are on their way to be added to the Ultimate Team 15 database and most probably to the FIFA 15 database as well! Earlier this week EA Sports added the two new MLS teams in FUT 15, New York City FC and SC Orlando City. In the meantime the teams were removed which probably means that the EA dev team were testing the functionality of their addition to the database.  In all likelihood the two MLS clubs will be added in FIFA 15 with the January/February roster update just like Vancouver Whitecaps were added back in FIFA 11.

These in-form players will be available in pack from 5th November 6:00PM – 5:30PM 12th November. You can view the team in the Web App  or more detailed at FUTHead or FUTWiz.

If you need some FUT 15 coins then be sure to participate in the King’s Cup tournament:

The daily gifts are back on the Web App until November 16th! You can claim your gift everyday by accessing the Web App or the mobile companion app.

In other news, EA Sports and C.F. Pachuca announced that they reached a partnership agreement making Pachuca the third mexican club to be an official EA Sports partner after Santos Laguna and Puebla FC.

Here are some fine FIFA 15 articles and guides that we’ve found on the web this week:

– The Owner of the World – Making FIFA Coins with Tournaments

– How to Build a FUT 15 Hybrid Squad with High Chemistry

– The most advantageous players in FUT 15

After Borussia Dortmund, another 1. Bundesliga team sent some of their players to compete in the FUT 15 Player Tournament and the team we’re talking about is 1. FC Koln:

Crazy GOTW #5 from EA Sports that features an insane finish from Honda, a sublime strike from Ramsey and many more great goals:

Hope you enjoyed this week’s FIFA 15 news, will see you next week as usual!