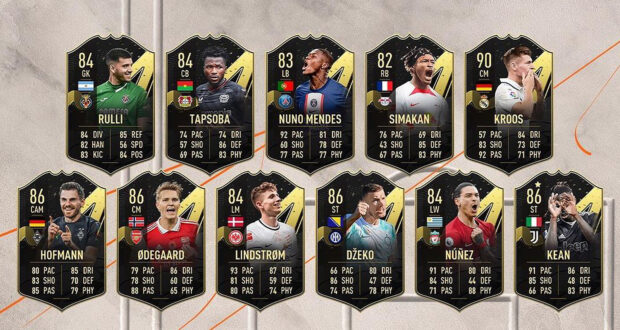 The final TOTW before the 2022 World Cup is here and at first glance, it looks above average.

TOTW 9 features some big names such as Arsenal’s Martin Odegaard, Real Madrid’s Toni Kroos or Liverpool’s Darwin Nunez. The latter will also receive an upgrade to his Ones To Watch card after his inclusion in this TOTW.

You can discover the rest of the players who made the cut for the official Team of the Week 9 below:

Overall, TOTW 9 looks pretty decent, especially with Juventus’ Moise Kean as Featured Player. For those who are new, the TOTW Featured Player status is awarded to players that have a maximum base card rating of 80 OVR and at the same time must not appear in any live events like RuleBreakers or OTW. The Featured Player also receives an extra stats boost compared to other TOTW players.

Whether you do it via SBC packs or buy packs directly with FIFA coins, chances to pack some of these in-form players this week are pretty high.

ℹ️ This is the final TOTW until after the World Cup has finished.#TOTW | #FIFA23 pic.twitter.com/I7Trw7Bixz

The Silver Stars Objectives Player of this week is Torino’s midfielder, Karol Linetty. You can unlock him by completing the following in-game tasks:

You can battle TOTW 9 in Squad Battles in your desired difficulty, which can net you up to a maximum of 2.000 Squad Battle Ranking points.

As you may already know, Team of the Week will pause during the FIFA World Cup. TOTW 9 will be the final TOTW before the domestic leagues resume and will be available in packs for 7 days until November 23.