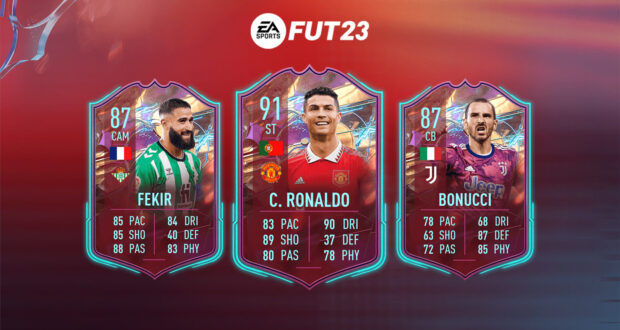 The third major promo of FIFA 23 Ultimate Team is here!

The Rulebreakers Team 1 featuring 91 rated Cristiano Ronaldo is now LIVE in FIFA Ultimate Team.  In addition to 12 new special players in packs, we will also have new themed SBCs and Player Objectives.

Similar to FIFA 22 RuleBreakers, a group of specially selected players received a minor downgrade in one of the six card stats and received varying degrees of boosts in the other five.

As mentioned earlier, players selected for this promo will receive a minor stat downgrade on one of the six card stats. However, they will receive boosts in the other five card stats – overall making the card more useful. For instance, the shooting and dribbling stats on Cristiano Ronaldo’s gold card is is 92 and 85 respectively. However, his Rulebreaker card has shooting and dribbling stats of 89 and 90 respectively. Similar to dribbling, his pace, passing, defending and physical stats have also been boosted.

EA has announced that Rulebreakers will be released as two separate teams. The first team – which is shown below – is in packs now until October 21st, 2022.

You can get even more Rulebreakers in your squad by completing themed SBCs such as:

My opinion on the SBC… Faivreable.

I'll get my coat!

What are your thoughts? pic.twitter.com/eiIcEnd6FM

Moreover, if you head into Objectives you will see another Rulebreaker! Paulinho (84) from Bayer Leverkusen is ready to be unlocked if you complete the next in-game tasks:

In addition, you can also complete some objectives to unlock PSV’s striker, Luuk de Jong (86):

The Eredivisie 1st Owner Squad is already incredibly strong and now it's about to get even better!#FIFA23 #FUT23 pic.twitter.com/i0GgIshFa3

Mini-Release
Similar to all other promos, EA has dropped a Mini-Release of three Rulebreakers cards and they are:

In the meantime the second team has dropped in packs featuring:

If you open a Rare Players Pack, there is a 6.3% probability of packing a Rulebreaker player. If those odds don’t do for you, then you can try your luck on other games with better odds at BetPokies.com.

These cards will be in packs until Friday, October 28th when the next promo will be revealed in FIFA 23 Ultimate Team.