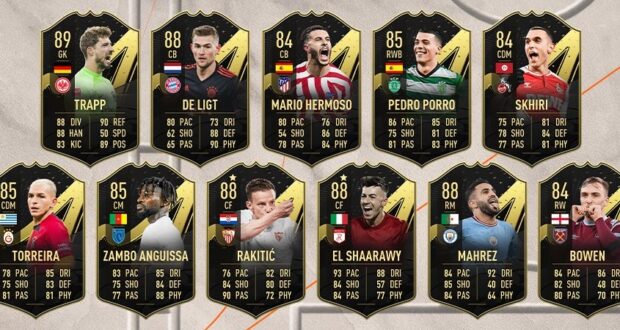 The newest Team of the Week (TOTW) is now available in FIFA 23 Ultimate Team.

Despite some omissions, TOTW 13 is packed with high rated cards that can potentially improve your squad and help you win matches in Division Rivals or Squad Battles. Most notable players from this week’s batch of TOTW are Eintracht Frankfurt’s goalie, Kevin Trap with an 89-rated card, Bayern Munich’s defender Matthijs de Ligt with an 88-rated card and Manchester City’s winger, Riyad Mahrez with an 88-rated card as well.

Owners of Matthijs de Ligt Ones To Watch (OTW) card will surely be happy to see him in TOTW 13 as it will result in another upgrade to his OTW item. Moreover, the two Featured TOTW Players for this week are Stephan El Shaarawy from Roma and Sevilla’s Ivan Rakatic, both receiving a boosted 88-rated In-Form card.

For those who don’t know, the TOTW Featured Player status is awarded to players that have a maximum base card rating of 80 OVR and at the same time must not appear in any live events like Winter Wildcards or Rulebreakers. The Featured Player also receives an extra stats boost compared to other TOTW players.

Not too shabby for a TOTW. Stephan El Shaarawy is by far the most attractive player of the bunch while Napoli’s Andre-Frank Zambo Anguissa 85-rated item looks like an exceptional all-around central midfielder if you slap a Deadeye Chemistry Style on him.

The biggest omission in this squad would be Manchester City’s striker Erling Haaland after his hat-trick against Wolves on the weekend, however the Norwegian superstar is pretty much set to feature as the 12th TOTY Man which would explain his absence.

Playing online games such as FUT is always exciting if you have the right squad, you can find other games to keep you busy on sites such as situs judi slot online.

All of Europe's big leagues are back in full swing 🔥#TOTW 13's arrived in #FIFA23 Ultimate Team#FUT pic.twitter.com/YFfkR1Ioue

The Silver Stars Objectives Player of this week is KV Mechelen’s left-midfielder, Nikola Storm. You can unlock his 74-rated Silver In-Form card by completing the following in-game tasks:

You can find more fun challenges on games like those in slot online terbaik that are designed for everyone to win.

You can battle TOTW 13 in Squad Battles in your desired difficulty, which can net you up to a maximum of 2.000 Squad Battle Ranking points.

fifa 23 fut totw 2023-01-25
Christian Silvestri
Previous: 2023 eMLS Season To Kick Off
Next: eSerie A Returns For Another Season