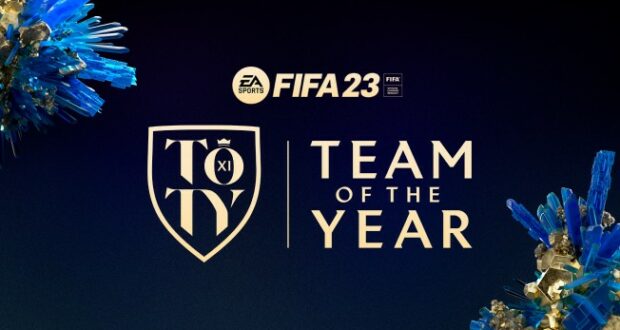 The most awaited promo of the season is now LIVE in FIFA 23 Ultimate Team.

Last week we saw EA announcing the nominees for Team of the Year (TOTY) with 100 footballers making the shortlist for their performances in 2022. With the community votes cast in, now we know the Final XI.

With the release of the TOTY squad we will also themed objectives, squad building challenges and promo packs during the course of this event.

The Team of the Year

Featuring 11 of the best players from around the world voted by the fans. There are some familiar faces and newcomers, but quite possibly the biggest shock is that Cristiano Ronaldo will not feature in this squad for the first time since FIFA 11 when TOTY was introduced! Here is the official XI:

With a winner’s medal in the biggest club competition in Europe, it’s hard to look past Thibaut Courtois. He played a pivotal role in Real Madrid’s campaign and topped it off with a Man of the Match performance in the Champions League 2022 final.

A World Cup semi-final with Morocco was definitely the highlight of Hakimi’s season. The 2x Moroccan Footballer of the Year had to be in this year’s TOTY.

Everyone’s favourite centre-back has cemented himself amongst the greatest to play in the Premier League. This vote might’ve been influenced by the fact that he is the most popular CB player in the game but nonetheless a deserved place in this year’s Final XI.

A speedster in the game and in real-life. After a Champions League winning season with Real Madrid, this will be Militão’s first ever blue card and quite possibly not his last.

Jude Bellingham is arguably the most sought-after player in all of football right now. The 19-year-old is having an amazing season with Dortmund and more recently was a star in England’s World Cup campaign. It’s clear to see why he was chosen for the TOTY.

The 2018 Ballon d’Or winner has had another successful season with Real Madrid, whilst playing a pivotal role for Croatia in what might positionally be his last ever World Cup.

Six in a row! Even though Belgium had a disappointing World Cup campaign, De Bruyne still managed to score 15 goals and have 8 assists in a title winning campaign with Manchester City.

With 28 goals and 17 assists in Ligue 1 and a hat-rick in the World Cup final, Kylian Mbappé is on course to become one of the greatest players of all-time.

Arguably the greatest player of all-time, Messi had a successful first season with Paris Saint Germain and captained Argentina to their third World Cup trophy.

Currently the best player on the planet. Karim Benzema has had the most successful year in football with the Champions League, LaLiga title and Ballon d’Or.

The most fearsome frontline in football.

Just like in past editions, the TOTY will be released in separate batches as follows:

So if you have packs saved in your FUT account, then it is better to save them until Thursday, January 26.

But that’s not all! A 12th TOTY player is set to be released in similar fashion as in past FUT editions. The community will have to vote starting Monday, January 23 one of the next three nominated players:

To vote, you will have to login to your FUT account in-game or via the web/companion app and wait for the 12th Man TOTY Player Pick screen to appear. The player you pick from this selection will get your vote as the 12th Man TOTY.

With the voting concluded, the 12th TOTY player is Erling Haaland!

All of these players will be in packs for a full week.

The full #TOTY squad is now in packs, including Haaland as the 12th Man and other 11 Honourable Mentions players.

Be sure to enter our giveaway for a chance to pack one of these players! 👀👇 https://t.co/3wYdQwteT2 pic.twitter.com/jP9dlAnWWi

As previously announced, EA Sports have introduced a new TOTY card this year in FIFA 23, the TOTY ICONs! This special promo celebrates iconic players that would have earned their place in TOTY.

The first team is now in packs and features the next six players:

The first #TOTY ICONs are now available in #FIFA23. pic.twitter.com/sXgUBLfMtQ

The second team of legendary players has also been dropped in FUT 23 and features:

6 more of the best who would've been no strangers to Team of the Year at the peak of their powers 🙌#TOTY ICONs Team 2, now live in #FUT in #FIFA23. pic.twitter.com/viBRRYC2u8

As mentioned at the start of this post, the promo also features themed Squad Building Challenges and Objectives such as:

More TOTY content is set to be released in the following days.

fifa 23 fut toty 2023-01-27
Damien
Previous: eLigue 1: Everything To Know About The New Season
Next: How To Grind Packs for TOTY Release