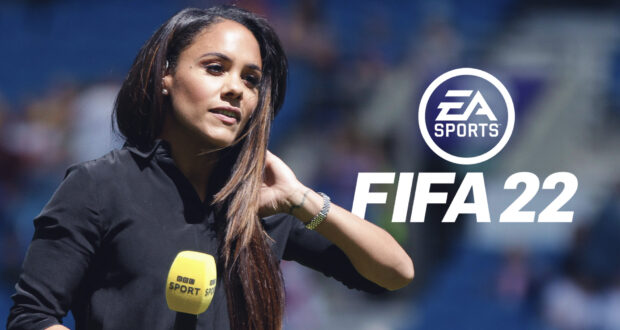 In EA Sports FIFA, commentaries are an integral part of the game experience and contribute to the feeling of living a live match. In between 2 matches, enjoy an experience that is just as immersive and try to win some money by playing live casino. This may be easier than trying to make a career out of FIFA!

It is now known who will be the British voices commenting on FIFA 22: Derek Rae and Stewart Robson will be accompanied for the first time by Alex Scott. The 36-year-old is replacing Alan McNally and serving as the pitchside reporter in Career Mode.

A great career for the former Arsenal right back wing

Alex Scott is a British television presenter and former professional footballer. She played as a right back wing for Arsenal and played 140 times for the England national soccer team and even represented her country in the London Olympics in 2012. After these incredible achievements, the former soccer star will make history as the female voice broadcast in the FIFA game series.

Her inclusion in FIFA 22 has been applauded and confirms EA’s transition to better include female talent in its games. On Twitter, she wrote, “This is a great moment for FIFA, for soccer and for women and girls around the world. It’s also a great moment for me personally and professionally,” adding on Instagram, “It’s an honor to be part of the institution of the FIFA game, alongside some of my brilliant fellow presenters.  I know this is just the beginning of a stronger representation of women’s soccer from EA Sports and the soccer community as a whole.”

Happy to finally share the news that I joined the FIFA family and will be commentating for #FIFA22! 🙌🏾🎮

If the news of the choice of Alex as a woman commentator is a big deal, it is not the first time that EA chooses women to commentate FIFA. In FIFA 21, Nira Juanco, journalist for Gol Televisón in Spain, is known as a Formula 1 commentator. She joined a male commentary duo in FIFA 21, as did Esther Sedlaczek, who has been covering soccer in Germany for Sky since 2011. EA recently announced the end of its collaboration with a French commentator accused of sexism and sexual assault.

The publisher explained its decision: “It is very important to us that the behavior of our athletes and partners is in accordance with the values of EA Sports. As a result of Pierre Ménès’ actions, we are immediately ending our relationship with him. EA will not include Pierre Ménès’ comments in FIFA 22, nor in future versions of the game.”

Alex Scott &
Stewart Robson
Will be a new commentators in #FIFA22 🙌 pic.twitter.com/iroNrq1Acy

A slow feminization of the game

EA Sports has often been criticized for its lack of feminization of a game released in 1993. As a reminder, it is possible to play with women’s national teams since FIFA 16. It is now possible to create a female avatar in Career mode and encounter female soccer stars in VOLTA FOOTBALL, but what about women’s leagues that would bring more parity in this must-have game ? FIFA has recently taken steps towards for more gender equality in soccer, let’s remember Fatma Samoura’s nomination at the governing bodies for example; let’s hope that the FIFA games will follow the trend!