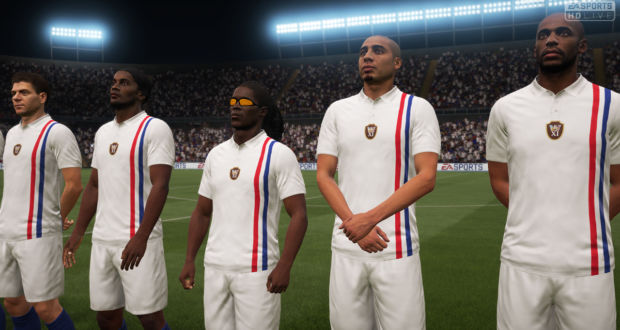 Back in the day, FIFA 2000 made little in the way of technological advances after the stunning, fast-paced affair that was the universally-acclaimed FIFA ’99. All too soon after its release, FIFA 2000 would be made redundant by the advent of online play on its PC successors, and the emergence of the mainstream next-gen consoles: the PS2, Gamecube and Xbox.

The forthcoming birth of the rival ‘Pro Evo’ franchise further underlined its status as an irrelevance. However, as noted by Gamespot, FIFA 2000 will always be remembered by EA aficionados for its special league of forty ‘classic’ teams. The novelty inclusion of a third-tier Port Vale, as a ‘Rest of the World’ team, was also famous as a deal-breaker for lifelong Vale fan Robbie Williams, who vocalised the game’s introduction song ‘It’s Only Us’:

Clearly, the current generation of staff at EA also appreciate the power that nostalgia has amongst FIFA fans, and this was particularly evident in FIFA 14, which brought us unlockable retro kits and an ever-expanding roster of ‘legends’ (or ‘icons’) in FIFA Ultimate Team (FUT).

Only this year, the developers of FIFA 19 also saw fit to open ‘The Journey’ in 1969, with a playable version of the match that saw Journey hero Alex Hunter’s grandfather score his 100th career goal. With nostalgia clearly still on the agenda, will EA once more include classic teams? With ‘The Journey’ coming to an end this year, we can think of no better way to mark the 20th anniversary of FIFA 2000 than to come up with our own list of ‘classic’ teams that would look good on FIFA 2020…

Young Ronaldo a ‘must’

As summed up by NF Sport Management, Cristiano Ronaldo is more than a footballer. From his slick hair to his famous stance over a free kick, he represents a way of life, a dream and an ideal that will be hero-worshipped by every Portuguese youngster for generations to come. In the real world, his presence in the Juventus squad is a major factor in their standing (as of November 2018) as third-favourites (at 6/1) to lift the Champions League in May 2019, by bookmakers such as Betway, all of which know that Ronaldo’s ripe age of thirty-three is still just a number.

As the face of FIFA, resplendent in the colours of the ‘Bianconeri’, Ronaldo is the epitome of stardom, but it was not always thus. If EA want to really max out on the nostalgia next time, they will need to bring back the buck-toothed misfit version of the ‘CR7’ we know and love, who dazzled the world in the green and white hoops of his first pro club – even if his original incarnation in FIFA 2002 is pure nightmare fuel…

As for the 2002/03 season itself, Sporting Lisbon finished in a very distant third place and won precisely nothing. It was a quiet season that brought more negatives than positives, with the Leões crashing out of both European cups at the first hurdle, while also seeing their domestic cup hopes smashed by a 1-0 home defeat to lower league Naval. Just imagine the Youtube hits if there was an influencer out there with the skill to get ‘Sporting Lisbon 2002/03’ to a Champions League final with the Juventus of today!

Other teams for EA to consider – and why

This is where it might get a bit controversial, and universally catering to tastes is an impossible task for EA. Nonetheless, iconic English teams will be amongst the first for consideration. For instance, who can forget the Blackburn squad of 1994/95 that temporarily broke Manchester United’s mantle as the unquestioned force of the 1990s? One half of the famous ‘SAS’ strike partnership (Alan Shearer) already has FUT legend status, so there is already plenty in the way of precedent. Other surprise packages have come and gone, such as the Norwich City team that (as recalled by BBC Sport) once floored Bayern Munich on their own turf in the 1993/94 UEFA Cup, after finishing third in the inaugural Premier League season. The Wimbledon of 1982-88, which rose from the fourth tier to win the FA Cup is another team that springs to mind, if only for the novelty of seeing the likes of Vinnie Jones or John Fashanu as a FUT legend!

Further afield, there are other teams which would be good candidates to enter as the ‘classic teams’ of FIFA 2020. One notable team in that regard would be the Roma squad of 1995/96. Why? They won precisely nothing back then, but contained a young Francesco Totti that would be the sole remaining survivor from FIFA ’96 (the first to contain real players) to feature in FIFA 17, remaining a top passer until the very end:

Those amongst us that like to revisit older FIFA titles also have a soft spot for the Malaysian sides that featured between ’96 and ’98 and never returned. Real-life 1996 Liga Perdana winners Sabah, complete with cult hero Scott Ollerenshaw, are a particular favourite. Ollerenshaw won the top scorer award in successive seasons during that era, and left the club after scoring 110 times in 106 appearances – a real claim for FUT legend status if ever there was one! In fact, any crisp, current-gen console version of any ‘classic team’ from FIFA 2000 would be very welcome, and the possibilities are endless. Your move, EA…