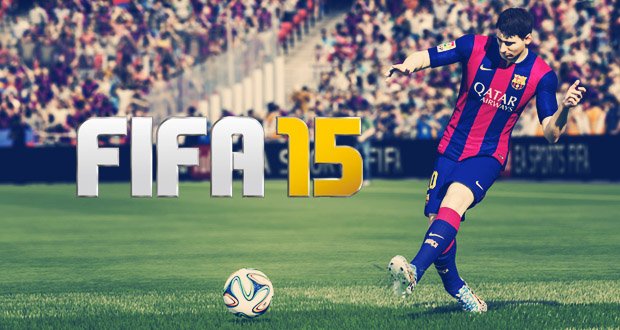 Goalkeepers have been completely rewritten for FIFA 15 with over 50 new save animations, improved AI and a new, realistic player model. Our Next Gen goalkeepers are more responsive and fluid when they move and look and think like real-life keepers.

The main changes to goalkeepers are:

Keepers now read and react to gameplay situations, adjusting their movement if going in the wrong direction, and making last-ditch saves by reaching back or throwing out a leg. FIFA 15 also brings a new level of realism to the way keepers react to shots that are difficult to handle. Where previously goalkeepers would catch most balls they touched, you’ll now see a new range of authentic deflections and tips as keepers try to make a save.

Goalkeepers make better decisions in one-on-ones and when tracking the ball on crosses, corners and through balls towards their box. Keepers in FIFA 15 command their area with more awareness and intelligence than ever before.

Goalies will also read the flight of balls and you’ll see more variety in how they react to swerving, dipping or turbulent shots.

With keepers more mobile, it opens up new scoring opportunities for attackers. Your opponent recognizes goalkeeper movement and will attempt shots back across goal, nutmegs or quick shots which will leave no time to react.

Let’s take a look at the new additions coming to FIFA 15: Ultimate Team:

Think you know what would make a winning team? Concept Squads is a powerful new squad planning tool that allows you to plan future squads using the entire FUT player catalogue. Use Concept Squads to plan your next Transfer Market buys, find replacements for players, and test out different Chemistry combinations.

The new Friendly Seasons mode lets you challenge your friends in a 1 v 1 version of the fan favourite Seasons format and track your stats. Win seasons to earn the current title holder position and the bragging rights that come with it!

In FUT 15 you’ll be able to try out some of the most highly sought after players in the game right away by signing them to your club on loan! Sign loan players for the set amount of matches and use them wisely during their loan contract’s duration to win a big Tournament Final or get the decisive win to clinch a Season Title.

Achieve greatness on the pitch with the legends of the past and the stars of today! Check out the new Legends who will join the 41 from last year on Xbox 360 and Xbox One. Get ready to play with football greats such as Roberto Carlos, Peter Schmeichel, Alan Shearer, and Bobby Moore. You can find the complete list of Legends bellow:

*Romario was removed due to copyright issues!

PHY, which stands for “Physical”, is the new sixth base attribute in FIFA 15 that will be featured on FUT player items. It is a measure of key physical traits such as Strength, Stamina, and Jumping. PHY is important to FIFA 15 and FUT because it will help you determine a player’s ability to win physical battles across the pitch and keep their fitness throughout.

Although Heading was a great attribute to judge players by, PHY will have a more significant impact during a match. By paying attention to the players’ PHY attribute you’ll be better prepared to build your dream team in FUT 15 and beyond.

One of FIFA’s most popular modes continues to improve as managing and finding players becomes even more authentic.

FIFA 15 gives you a brand new way to manage squads and team sheets across all game modes.

Customise up to six different Team Sheets per club and alter your strategy based on your next opponent, the changing tactics in-game and fitness of your players. Get your favorite team playing the way *you* want them to play.

Up to five attacking and defending player instructions can be applied to each of the ten outfield players. These instructions let you manage the attacking runs and defensive positions players take on the pitch and gives you deeper customisation options for how your team sets up.

Preset formations for any of your custom squads and pick the best to take on your next opponent.

Set roles like captain, set-piece and penalty takers for each of your squads.

Set a default Team Tactic to each of your Team Sheets so your gameplan is locked before hitting the pitch. Or go deeper and add custom tactics to any of your line-ups.

FIFA 15 – Pro Clubs and Other Modes

Enjoy improved customization options for your Club and Pro and a simplified flow into matches:

Other Modes in FIFA 15

Other modes/features in FIFA 15 include:

EA SPORTS Football Club has a new widget present across all modes that makes it easier to share news with your friends and redeem items in our Catalogue.

Powered by Goal.com and updated as news breaks, Match Day Live pulls football stories directly into your FIFA 15 experience so you are always aware of the latest headline or rumor.

Check league tables and stats of all our featured leagues, or jump in and play your team’s next fixture before it happens via EA SPORTS Football Club Match Day.

In case you missed the FIFA 15 Gamescom presentation you can watch it bellow in HD:

We have some great news for Bundesliga fans, EA Sports and DFL Sports Enterprises have extended their partnership for 3 more seasons giving EA exclusive rights over 1.Bundesliga and 2.Bundesliga!

Two new game covers have been released this week, one for Poland and the other one for Australia. Both covers will feature Messi as the main cover star being joined by Robert Lewandowski on the Polish cover and Tim Cahill on the Australian cover.

FIFA producer, Sebastian Enrique, confirmed that there will be two Arabic commentators for the Middle Eastern version of FIFA 15! Middle East fans will be disappointed by this news because they specifically requested EA to add a single commentator this year and not two because real life football matches in Middle East are commentated just by one commentator.

The FIFA 15 face list that we’ve shared in our previous news post has been updated with a a new list called “FIFA 15 Updated Player Faces, Haircuts, & Beards” and you can check it out here. We also have tons of face screens from the FIFA 15 demo that is played at Gamescom these days:

Speaking about the demo, there is no official release date for the FIFA 15 demo but we will know the official date by next week. Anyway we do know two things about the demo thanks to all the gameplay footage that we got from Gamescom, the teams that will be in it and the stadium that you will play the matches on:

The guys over at FUTHead had the chance to sit and talk with the Ultimate Team producer,Marcel Kuhn who spoke about all the new features that we can expect in FUT 15:

We end this long news post with the best FIFA 15 related articles of this week:

– FIFA 15: 10 Players Who Will Definitely Be Over-Rated

– Tim Howard talks about his role in FIFA 15

Thanks for reading this news post! We’ll be back next week with more FIFA 15 news!