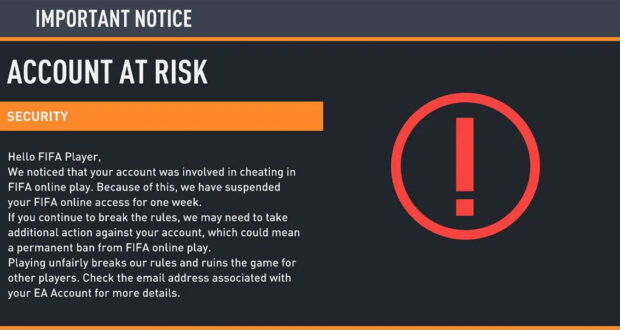 EA Sports Bans Over 30.000 FIFA 22 Players For Exploiting The “No Loss Glitch”

In a social media post EA Sports announced that they have banned over 30.000 FUT players for abusing the so called “no loss glitch”.

A 7-day ban has been issued by EA this morning after many Ultimate Team players took advantage of an in-game glitch that allowed them to back out of a match and not receive a loss on their record.

We have identified over 30K active accounts that exploited this issue consistently and have suspended them from FIFA 22 online for 7 days, preventing them from participating in this week’s FUT Champions Finals.

What is the “no loss glitch”?

The “no loss glitch” was first reported in a viral video last week by TikTok user apexskillz.

In the short clip you can see how the player rage quits a game after conceding a goal by going to the PlayStation dashboard and waiting for 30 seconds until the game kicks him out.

Upon returning to the FIFA 22 menu you can see that the remaining FUT Champions matches were the same as before starting the match thus revealing the “no loss glitch”.  The glitch only worked on PlayStation or Xbox platforms.

Two days after the video went viral, EA Sports devs reported that the glitch has been patched and the players that exploited it to rank higher in the Weekend League and Division Rivals will receive some sort of punishment.

Earlier today, we resolved an issue in FUT Champions that could allow players to leave a match without suffering a loss.

We are identifying players that exploited this issue and will be following up with them directly.

Today EA confirmed that over 30,000 active accounts that exploited the glitch consistently have been suspended from any online play in FIFA 22 for a full week, that includes access to the FUT 22 Web and Companion apps.

Many players welcomed the news of suspensions arguing that harsher punishments should have been applied to the cheaters involved in the misconduct:

Good morning 😊 Do you think this is fair?

But at least action was taken pic.twitter.com/ExZzohNUJb

Those affected by the ban weren’t very happy with the punishment some reporting that they have received a 1000-day ban instead of the one week ban as announced by EA:

However it was later confirmed by EA that the 1000-day ban message was simply a visual bug.

FUT has always been plagued by cheaters and actions like these from EA are much appreciated by honest players that actually like to have fun while playing the game without resorting to shortcuts or “glitches”.