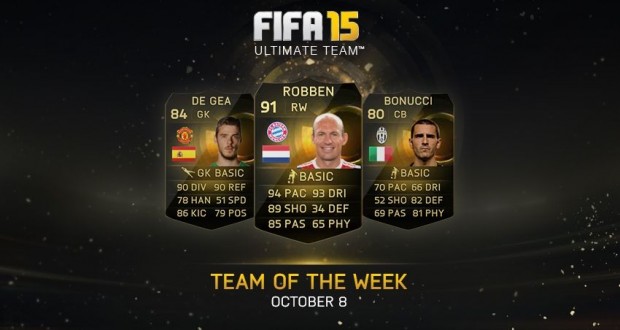 You may have noticed that the first title update for FIFA 15 is now available on the PC. If the update doesn’t start automatically when you open the Origin app, right-click on the FIFA 15 game and select “Check for Update”. The update addresses the following issues:

A similar update will be available on Xbox One and PS4 in the near future.

The 4th TOTW in FUT 15 brings another set of great IN-Forms like Arjen Robben,Naldo or Alexandre Lacazette:

These in-form players will be available in pack from 8th October 6:00PM – 5:30PM 15th October. You can view the team in the Web App  or more detailed at FUTHead or FUTWiz.

EA Sports announced yesterday that the first Pro Player cards owners in Ultimate Team 15 are Phil Jones from Manchester United and AFC Wimbledon striker, Adebayo Akinfenwa. You can check their card ratings in the following pics:

The Pro Player cards are untradable and are awarded only to real life pro footballers that play FIFA!

Head up to the tournament section in Ultimate Team 15 because there’s a new tournament available called Nordic Cup, all details about it can be found bellow:

Last but not least, here are the top FIFA 15 related articles and guides published on the web this week:

– Tête a Tête with Silvio Teixeira: The Rain is Back !

– FUT 15 Scripting Debate: Are In-forms Worth The Coins?

Thanks again for reading this week’s FIFA 15 news! See you next week!