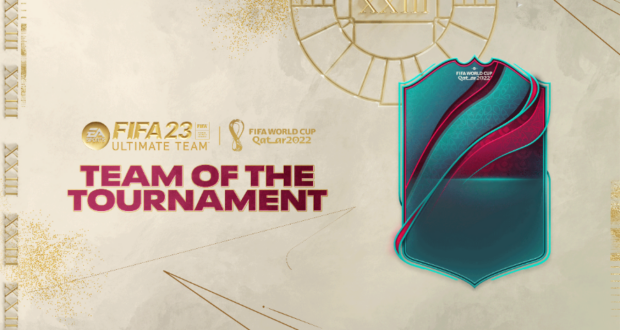 The final promo of the World Cup campaign in FIFA 23 Ultimate Team is now live!

As the 2022 FIFA World Cup comes to a dramatic conclusion this Sunday, EA Sports recognizes the best players of this World Cup edition with the Team of the Tournament (TOTT) promo in FUT 23.

This event will conclude the 5-week World Cup focused content in FIFA 23 started by EA Sports in early November. Now let’s see who made it in the World Cup Team of the Tournament, shall we?

The squad include players such as Lionel Messi, Harry Kane or Thiago Silva and plenty of other high-profile players. Here’s how the complete team looks like:

As you can see, the highest-rated players are Paris Saint-Germain duo Lionel Messi and Kylian Mbappe that will face off at the Lusail Stadium in Qatar this Sunday where the 2022 World Cup final will take place. This will be a great opportunity to bet on who will lift the trophy by checking the best non Gamstop betting sites.

Big names such as Luka Modric, Oliver Giroud or Dominik Livakovic are surprisingly missing from the team, however we expect EA Sports to release them in the following days as either SBCs, Objectives or via a Mini-Release.

29 unforgettable days all come down to this. 🌍🏆

Introducing the #FIFA23 FIFA World Cup Team of the Tournament, celebrating a selection of the best performers and performances that inspired moments we won't soon forget: https://t.co/R5zYw3qL6w

These cards will be available in packs until next Friday, December 23rd.

Checking the SBC section in FIFA 23 Ultimate Team you will notice a new collection of themed challenges such as:

Don’t forget that if you play FIFA 23 by January 3 you can earn a loan ICON or loan FUT Hero for 7 matches, and a special untradeable FIFA World Cup History Makers player from the same country whose will receive two upgrades: once in January and once in February.

The History Makers included in this offer are:

If you collect the World Cup Swaps Tokens, be sure to complete any Objectives or SBCs that include them as rewards until December 23rd, as they will expire afterwards.

The next FUT 23 event will be the Winter Wildcards promo that will drop next Friday.