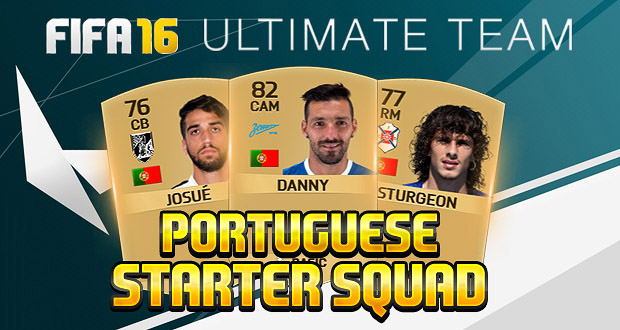 After the Hidden Gems series we decided to start a squad builder series where we will feature cheap and good squads to compete with in FIFA 16 Ultimate Team. The first squad we have for you is a starter squad featuring gold Portuguese players. As a premise, the starter squads can’t cost more than 5.000 coins! So let’s get into it:

Goalkeeper: Rui Patricio – Sporting’s goalkeeper is our choice in goal for this squad builder, the 190cm | 6’2″ tall goalkeeper is a brick wall and produces some spectacular saves thanks to his 84 Diving, 80 Reflexes, 80 Handling and 79 Reactions. Cost = 650 coins on open bid.

Left Midfielder: Cavaleiro – The young Portuguese player is one of football’s future prospects because at just 21 years of age he’s already 76 rated in FIFA 16. With 86 Pace, 83 Dribbling, 79 Ball Control, 78 Shot Power, 73 Crossing, H/M workrates and double 4* skills and weakfoot he is one hell of a player in-game. Cost = 350 coins on open bid.

Right CDM: Raul Meireles – Just two words can describe this player: LONG SHOTS! This guy might be in the twilight years of his career but he has a cannon for a foot in FIFA 16 and he’s one of the few players in the game that doesn’t have a single red stat! Beside the 84 Shot Power, 81 Long Shots and the “Long Shot Taker” trait he also displays the following stats: 78 Reactions, 78 Ball Control, 76 Dribbling, 78 Interceptions, 78 Stamina, 78 Short Passing, 77 Long Passing and 72 Sliding Tackle.  And let’s not forget his M/M workrates, the 3* skill moves and the 4* weak foot. Cost = 450 coins on open bid.

Right Midfielder: Sturgeon – Just like Cavaleiro he has double 4* skills and weak foot and H/M workrates. With 81 Pace, 82 Dribbling, 79 Ball Control, 77 Vision, 72 Crossing, 76 Short Passing, 74 Shot Power and 82 Stamina he will be doing lots of damages on his side of field. Cost = 350 coins on open bid.

CAM: Danny – If you already checked our first chapter of Hidden Gems series, you will know that Danny doesn’t need any further presentation. Cost = 500 coins on open bid.

Striker: Bebé – Just like above, the player has already been covered in the Hidden Gems series. His current club, Rayo Vallecano, might be struggling in La Liga at 5/1 at the time of writing in the odds with betfair, but he is a class act.  Cost = 400 coins on open bid.

For extra chemistry you can get a Portuguese manager: Machado Gonçalves or Marques Machado. Cost = 150 coins on open bid. 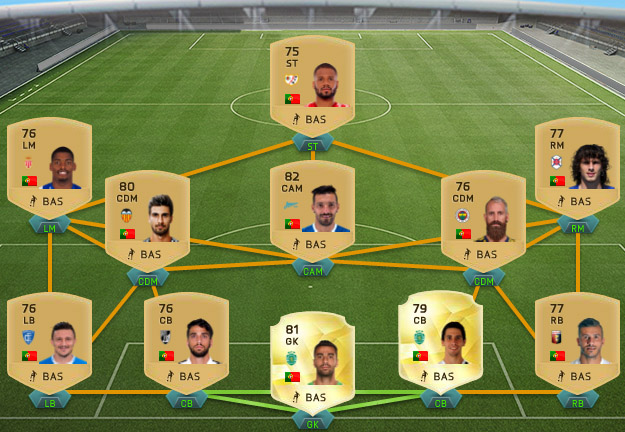