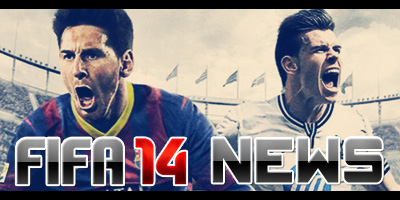 We have lots of FIFA 14 news for you today! Be sure not to miss them:

Last Sunday EA Sports announced that the Welsh and Spurs star Gareth Bale will join Messi on the cover of FIFA 14 in the UK, Ireland and Middle East:

Bellow you can see Gareth Bale’s free-kick technique and likeness being captured for the game:

And here is a FIFA 14 Next Gen screen with Bale taking a free-kick against Manchester City:

Czech Republic will have their own FIFA 14 cover featuring Messi and Fenerbahce’s Czech defender, Michal Kadlec:

France will only have Messi on its FIFA 14 cover after EA Sports chose to end the partnership with the French football star, Karim Benzema. However the steelbooks of PSG, O.Lyon and O.Marseille will be available to pre-order for those who wish to get a custom FIFA 14 cover of their favourite French team:

If you’re an Italian or Spanish FIFA fan, you can also pre-order your own FIFA 14 Steelbook copy with your favourite club logo on it! The Italian Steelbook collection features 5 clubs: Juventus, Napoli, AC Milan, Inter Milan and AS Roma. While the Spanish collection features 6 clubs: Betis Sevilla, Barcelona, Valencia, Atletico Madrid, Real Madrid and Sevilla FC!

FIFA 14 Brazilian Producer Gilliard Lopes confirmed that the 2014 World Cup game won’t be a DLC like the Euro 2012 DLC for FIFA 12. EA extended their license with FIFA until 2022 and will continue to produce the official video game of the World Cup like they did since 1998!

EA SPORTS cofirmed that FIFA 14 will include 19 fully-licensed clubs from Brazil! The 19 Brazilian clubs who have been officially licensed and will be showcased in-game are: Atlético Mineiro, Atlético Paranaense, Botafogo, Coritiba, Criciúma, Cruzeiro, Flamengo, Fluminense, Goiás, Grêmio, Internacional, Náutico, Palmeiras, Ponte Preta, Portuguesa, Santos, São Paulo, Vasco da Gama, and Vitória. There are 18 Brasileiro Série A teams and one Brasileiro Série B team (Palmeiras) which will feature in the ROTW! The two missing clubs from the Brazilian first division are Bahia and Corinthians who are still under negotiations with EA! Additional new league and club licenses will be announced in late August!

Also there are rumors that EA Sports are trying to add as many South American clubs as they can from Paraguay, Chile and Colombia! Another addition that EA wants in FIFA 14 is the Copa Libertadores tournament that will feature under a fake name like Copa EA Libertad or South American Clubs Cup because Konami holds the exclusive rights on it!

The Brazilian rapper, Marcelo D2 was confirmed as the latest artist to join the FIFA 14 Soundtrack List! The song which he will feature in FIFA 14 is yet to be announced!

For more FIFA 14 related articles and interviews please check the next links:

– Will CONCACAF finally be in a FIFA game? Possibly. (News10)

See you next week with more FIFA 14 News!