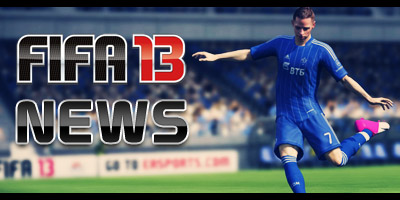 The latest FIFA 13 news are in! Check them out:

After the announcement of FIFA 13 on the Wii U console earlier this year, EA Sports released yesterday the first video trailer of FIFA 13 on Wii U along the features list and the release dates:

– Award-winning Gameplay-Enjoy the award-winning FIFA franchise gameplay, optimized for Wii-U. The Player Impact Engine delivers real-world physicality in every interaction on the pitch; Precision Dribbling brings a higher fidelity of touch on the ball for attacking players; and Tactical Defending places equal importance on positioning, intercepting passes and tackling.

– Lift and Look-See the game from the player’s on-field perspective and enjoy creative new ways to take free kicks and penalties. Simply lift and look through the GamePad screen to aim the ball, put the perfect curve on the shot, and let fly. Look to see which teammates are positioned for more dangerous opportunities.

– Shake and Shoot-Enjoy complete control of shooting- the most rewarding part of the game. Shake the GamePad to activate the shooting zone, touch the screen to pick a spot precisely on goal, and fire away.

– Precision Passing– Be more creative on the pitch, making decisive passes with precision and long balls with ease utilizing the touch screen.

– Play Together-You decide how to play-hands-on, manage, or play and manage. One player manages while up to four others play in Co-op Mode. Available in Exhibition Match, Tournaments and Career Mode.

– Connect with Friends -Use the Friends Tab while playing the game. See friends online and invite them to play using touch screen typing and real-time messaging.

– Complete Control– Full Team Management Control on the GamePad lets you change formations, make subs, switch player positions, change every facet of a team’s tactics, and even set man markers all without interrupting the game. Use the Interactive Radar to control all of your players on the pitch. Make your own defined defense splitting runs or get defenders to track back on defence.

– Manage the Match-Take the reins as the manager and watch the game unfold, making key strategic real-time decisions using the GamePad. Make half-time team talks and try to motivate key players. Gamers can chose to manage the team in all of the main game modes, including Tournaments and Career, and can even intervene and take control if the outcome is in doubt.

– Manager Hub – Analyze the match by looking at match or player specific stats to help make managerial decisions. Tap on any player to get full statistical analysis, including the opposition. See who’s having a great game or who is having a shocker. See where all the shots are being taken from to know where to strengthen or who to man mark. See a player’s performance stats and even their energy to help you make more informed substitutions.

– Real-World Drama – Experience the same drama as real world of football, either as a player or manager, with their consequences being played out on and off the pitch in Career Mode. See storylines play out in the press, experience the emotion and urgency of Transfer Deadline Day, and discover new talent using the scouting network.

– Touch Screen Navigation– Utilize the Gamepad to quickly select your favourite game modes and features. A much simpler and quicker way to get to the action.

– Complete Authenticity-Over 500 officially licensed clubs and authentic stadiums from around the world.

TOTW 9 was revealed yesterday on Ultimate Team 13 and you can get the next in-form players in the packs from 6PM GMT on 14th November – 21st November. You can view this team in-game *right now* and in the FUT Web App.

SOTW 10 was also revealed on FIFA Superstars featuring the next players:

If you want to get FIFA 13 on your iOS platform then go to the appstore!

In the meantime check the best FIFA 13 articles of the week:

– The Life and Times of a Pixelated Player (Z1G)

Finally check out Round 5 of the best FIFA 13 goals from EA Sports: