Latest News
Home / FIFA 23 / FIFA vs PES: Which Football Game Has Sold The Most Units? 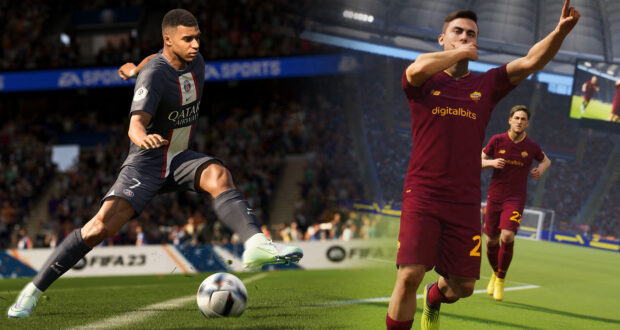 FIFA vs PES: Which Football Game Has Sold The Most Units?

FIFA vs PES is one football rivalry that has raged, on and off, for many years now. In terms of football sims, they don’t come much bigger. And both have enjoyed periods of dominance and of preference with gamers. But just which has sold the most units, and what does the future hold for both franchises?

The rivalry between the two football video games began way back in the 90s. FIFA was first on the scene, and because of this, it stole a march on PES, which was known by names such as Goal Storm and World Soccer: Winning Eleven back then, circa 1995, when the battle really commenced. In terms of sales, FIFA was dominant then, setting the tone for what was to come.

Fast forward and what transpired is that you couldn’t really split FIFA and PES, as it had become known, in terms of units sold, which was quite something. Yes, FIFA remained the most popular because of the licenses it held and the features provided, but if you look at the figures from FIFA 2000 and the first actual PES, the former sold 1.87 million copies and the latter 1.75 million.

As time went on, the popularity of playing football sims on console increased massively, which was reflected in sales. And again, it was FIFA out in front, but just by a head, if anything. FIFA 07 sold 6.38 million copies and PES 6 5.53 million. The following year FIFA 08 was bought by 9.5 million, while PES 2008 saw 8.5 million buys. There was nothing to split them, so either EA Sports, the creator of FIFA, had to do something to shake off the competition. Or Konami had to up their game somehow.

And then it happened, EA Sports introduced Ultimate Team into FIFA and changed the game for good, leaving PES in their wake. From the first FIFA to be released with Ultimate Team included, which was FIFA 09, the gap between the two franchises in terms of sales grew and grew. And now, the difference between the two is hundreds of millions of units, with clear daylight between the video games at this point.

So, what does the future hold? Well, some FIFA players disgruntled at the gameplay online have at times dipped into PES, which is now known as eFootball. But in the main, FIFA remains the only draw, and the likes of eFootball and any others continue to play catch up. But could that be about to change?

One of the reasons FIFA has remained out in front is because of the licenses it held with the FIFA organisation. And, after FIFA 23, which is due for release shortly, that agreement will come to an end, with FIFA not even going to be known as FIFA anymore. Instead, it will now be called EA Sports FC.

Therefore it will be a massive year for the FIFA franchise with FIFA 23, which will also contain dedicated World Cup content. Game sales will most likely see the same sharp rise in numbers, as other sectors associated to the event such as licensed bookmakers expect a flurry of bets and launch huge World Cup betting sections, all the way from the group stages to the finals. And it could be FIFA’s last chance to impress in terms of carrying its audience over to EA Sports FC and also an opportunity for eFootball to strike back.