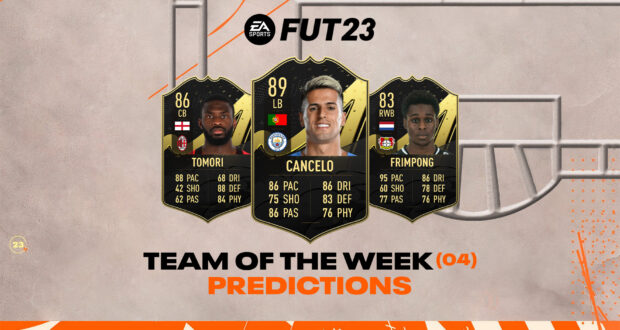 FIFA 23 Team of the Week 4 Predictions

After a heavily stacked Team of the Week 3 featuring the likes of Erling Haaland, Ben Yedder, Timo Werner and Rafael Leao, FIFA 23 Ultimate Team players are now setting their eyes on Team of the Week 4.

While TOTW 3 featured heavy hitting forwards, TOTW 4 might see a lot of highly popular defenders getting an In-form upgrade. Let’s see who might feature in TOTW 4:

Even though we did not see much goals in the battle between Spurs and Brighton, Lloris did an impressive job making 4 saves and keeping a clean sheet – thus helping his team maintain the 3rd position in the Premier League Table.

Phil Foden might be the best performer of this season who will be snubbed of a TOTW deserving performance two weeks in a row. Since Foden’s Road to the Knockout card is still in packs, EA will have no choice but not to give him a TOTW card. Instead Joao Cancelo, who had a brilliant game might get the nod for TOTW 4.

Real Madrid are still following up on their dream start to their  2022-23 season by scoring yet another win in the league, thanks to an early goal by Eder Militao. The Brazilian’s goal secured the win for Madrid and therefore he should be a lock in for TOTW 4.

The final defender of this week’s TOTW will be the Englishman who helped AC Milan secure an injury time lead over Juventus.

The Argentinian scored a brace to help Athetico Madrid edge over Girona in a 2-1 game. We can expect a position change for Correa from ST to RM.

Frimpong will be battling his teammate Moussa Diaby for a spot in TOTW 4 as both of them secured a brace (and Diaby also securing an assist). However, we feel that Frimpong will get the edge over Diaby due to his defensive performances as well.

Newcastle absolutely thrashed Brentford and Guimaraes played an important role in that. The Brazilian scored a brace that may help him secure a place in TOTW 4.

Even though he did not hit the net, Mason Mount has provided two assists that were crucial in helping Chelsea have a comfortable victory over Wolves.

Arsenal is leading the Premier League and owes a lot to the performances from both Bukayo Saka and Gabriel Martinelli. Although Martinelli was equally impressive this weekend, Saka’s brace may give him an edge over Martinelli.

A brace in a 2-1 victory over Sassuolo may imply that Edin Dzeko will be a lock on for TOTW 4.

When Modeste was subbed in, Dortmund were trailing in Der Klassiker. However, he soon gave an assist and scored a last minute equalizer to save a point for his team. He is our choice for the Featured TOTW Player.

Similar to Dzeko, a brace in a 2-1 victory over K.V. Kortrijk may earn Onuachu a spot in TOTW 4.