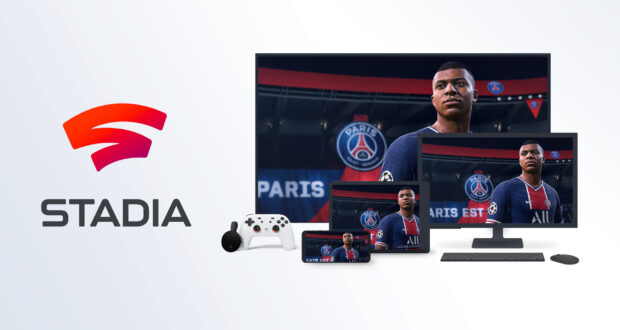 The FIFA 21 release day has finally arrived for Google Stadia players. Announced back in February, fans can now play FIFA 21 on Google’s gaming platform instantly on compatible screens and devices they already own.

This is the first FIFA title to be released on this new gaming platform but other EA titles will join FIFA 21 in the Stadia gaming catalogue like Madden NFL 21 and Star Wars Jedi: Fallen Order.

The features included in this version of FIFA 21 are the same as on PC, Xbox One or PlayStation 4. As long as you have a good internet connection and high-resolution screens, you can run the game at 4k/60 fps!

Remember that with Stadia there are no downloads or updates and every game released on this platform can be played instantly.

In order to play FIFA 21 on Google Stadia you will need to subscribe to Stadia Pro which costs $9.99 a month! However the first month is free so you can decide if the premium subscription is worth it or not. Stadia Pro comes with a variety of games that you can play for free and you can find the complete list of available games here. You can play Stadia on your computer via the Chrome browser, your compatible iOS/Android phone or tablet using the Stadia app, or your TV using a Chromecast Ultra with the Stadia Controller. Speaking of controllers, many of your favorite gamepads including Xbox/PS controllers are compatible with Stadia on computers and Android devices via a USB cable or Bluetooth, or you can simply use your mouse and keyboard.

Don’t forget that you will need an internet connection speed of 10 Mbps or greater in order to run Stadia!

To celebrate the launch of the game, a FIFA Community Day hosted by the Stadia team is scheduled for March 18th.