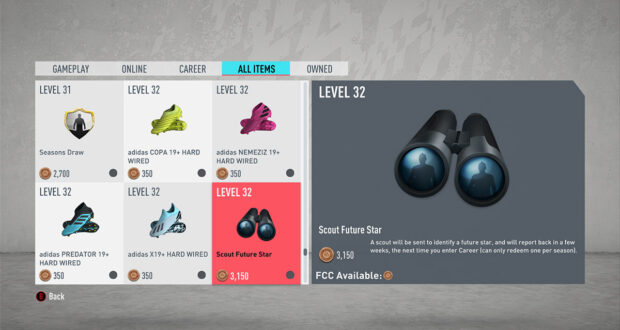 EASFC Catalogue Will Not Return For FIFA 21

It’s official, the EASFC Catalogue has been removed from FIFA 21 and most of the items that were previously available have been redistributed across other areas of the game.

What is the EASFC Catalogue?

The EA Sports Football Club Catalogue was introduced back in 2012 with the release of FIFA 13. You could redeem various items based on your XP level for your Virtual Pro, Career Mode or Ultimate Team via Football Club Credits that you could earn by simply playing the game.

You could also unlock kits, balls or even special teams like the MLS All-Star Team. In time most of the original items in the catalogue have been removed and added in other game modes, for example the FUT items were added last year in Season Objectives.

Where have the current items been redistributed?

What was left in the EASFC Catalogue in FIFA 20 has been redistributed as follows in FIFA 21:

You can still increase your EASFC level, earn Football Club Credits (FCC), and redeem items in previous FIFA versions that have the catalogue available.