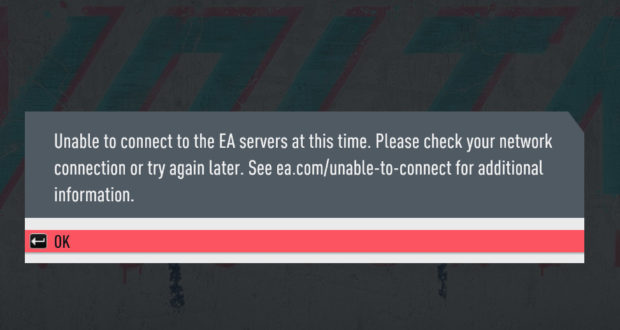 As you may have noticed FIFA 20 is offline across all platforms including Origin and the cause of this is a DDoS attack on EA’s servers.

Initially EA announced that they have disabled FUT and VOLTA match creation due to connectivity issues:

Stay tuned to this thread for more updates as we have them.

After a few hours they responded that the reason of the major server outage is a targeted DDoS attack on all their servers that also include games like Apex Legends or Star Wars Battlefront 2:

Today we experienced a series of DDoS attacks that we’ve now been able to resolve. If you’re still having trouble logging in, please contact us.

Following this announcement they have re-enabled match creation but Origin users still had issues accessing FIFA 20:

We're currently looking into the issues affecting our services. If you can't play online, access Origin or EA Help, we're on it.

After almost 17 hours since the initial attack, EA announced that all servers are back online again and players can resume playing their games:

The issues impacting EA Help, AHQ, Origin and connectivity across all titles are now resolved. Thank you for your patience.

Unfortunately this has been a common thing for the past year, last February EA’s servers were targeted by the infamous LizardSquad group who took offline all EA’s services for almost an entire day. As of now there have been no claims on who orchestrated today’s attack.