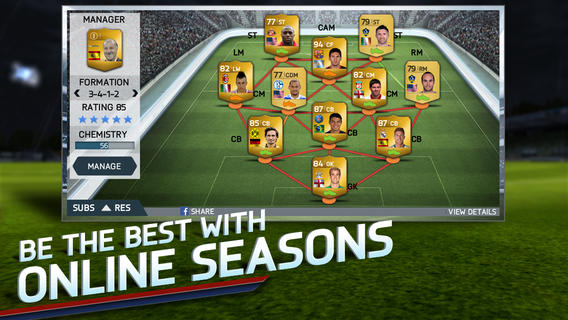 EA released the first title update for FIFA 14 on Xbox One this week that will fix the issues that we’ve wrote about last week. Moreover a second FIFA 14 title update is already live on PS4 while Xbox One users will have to wait a few more days to get it. Here’s the official statement on the 2nd update:

” The purpose of this update is to address a few key stability issues. In addition to stability, this update will ensure Virtual Pro attributes and stats accurately carry over from current-gen consoles to next-gen consoles. For early adopters who have already upgraded from PS3 to PS4 and have issues with their Virtual Pro carrying over, there are server updates ongoing to address this. “

EA also said that they’ve found the cause of the connectivity issues affecting Clubs/Co-op Seasons/Drop-in matches resulting in people being dropped from matches and a fix will be released soon.

You can send your own FIFA 14 NG feedback on Co-op Seasons/Clubs/Drop-In Issues here.

If you play FIFA 14 on your mobile then you’ll be happy to know that EA released a new update that adds Online Seasons to the game! You will be able to compete against real opponents from around the world and earn coins, items and packs! The update also contains:

FIFA 14  Mobile is available for free in the iTunes Store (iOs) and GooglePlay Store (Android).

In other news, EA announced a few days ago that they will shutdown the FIFA 12 servers:

So if you want to play one more FIFA 12 online match be sure to do it soon because 3 months from now it won’t be possible to do it anymore.

The 3rd episode of the FIFA 14 Next Gen Producer Series is focused on Precision Movement:

These IN-Form players will be available in packs from 27th November 6:00PM – 5:30PM 4th December. You can view this team in the Web App or more detailed at FUTHead.

Remember that you cannot play matches with the Generations squad.

FUT Legends are available only on Xbox consoles!

EA Sports published a set of photos that shows us some Next-Gen Head Scans of  FC Barcelona players. You can view all the screens here.

In the latest episode of The Boot Room, Darren Cross from Match Magazine talks through game-play improvements he used to win a recent match in FIFA 14:

You can find more FIFA 14 guides bellow, as well other related FIFA 14 articles and reviews:

Last thing we have today is the special Goals Of The Week compilation made by EA Sports to celebrate FUT Legends on Xbox One:

That’s the news for this week.