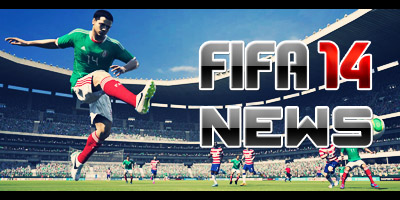 Don’t miss the latest news and updates on FIFA 14:

Last week the Manchester United striker, Javier ‘Chicharito’ Hernandez signed a multi-year contract with EA Sports and joined Messi on the US and Mexico cover:

Also a new FIFA 14 screen was released to celebrate the partnership between EA and Javier Hernandez:

Chile will have its own FIFA 14 cover featuring Messi and a well known Chilean player! The player has not been revealed yet but his silhouette can be visible in the image bellow.The cover will be revealed later today on EA SPORTS FIFA Latinoamérica facebook page!

Who will be the Chilean player to feature on the Chilean cover next to Messi? Vidal? Alexis Sanchez? Humberto Suazo? Leave your guess in the comments box bellow!

The FIFA 14 Messi SteelBook edition is now available to pre-order! Be sure to pre-order your own steelbook copy:

And here are the best FIFA 14 articles of the week from the web:

– FIFA 14: 5 Improved Defenders to Consider for Your Ultimate Team (BleacherReport)

That’s it for this week!