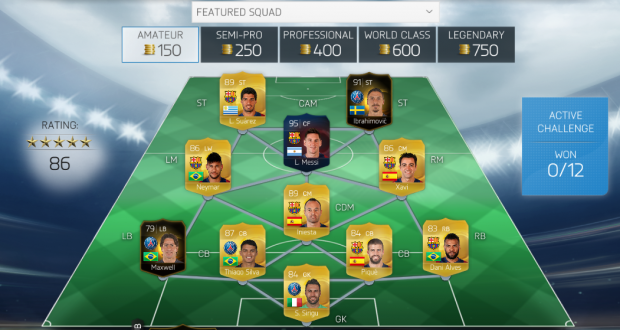 On December 11th the FIFA World servers went offline for a maintenance which addressed the following issues:

– Some cases where the user’s FUT Season or Tournament progression would display incorrectly in game.

– Some cases where users were not receiving coins at the end of a FUT match.

An impressive TOTW 11 is now live in packs with IF C.Ronaldo and IF Ibrahimovic:

This week’s new tournaments in FIFA World are:

Rode to the Finals
Squad Requirements: 2 players from Barcelona and 2 players from PSG in the First XI + Subs
Reward: 1 Forwards Pack
Difficulty: Semi-Pro

There are also 6 new accomplishments for you to unlock this week in the game:

The featured squad of the week is this amazing FC Barcelona/PSG hybrid featuring IF Ibrahimovic and Record Breaker Messi that you can challenge in the TOTW section:

And the last news we have for you today is that the Premium Gold Players Packs are available in the stores until tomorrow:

Thanks for reading this week’s FIFA World news! See you next time!