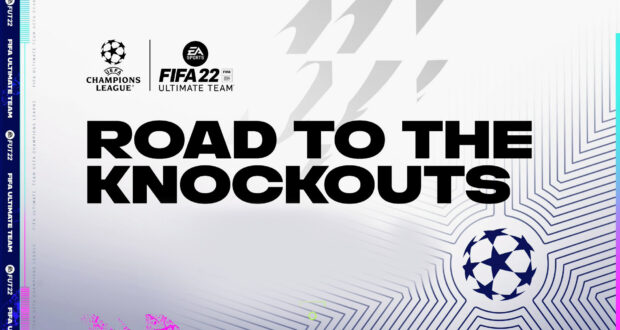 The next major promo of the season after OTW is now live in FIFA 22 Ultimate Team.

The Road To The Knockouts promo was confirmed by EA Sports earlier this week thanks to the loading screens in FUT revealing the first special FUT player cards from the Champions League, Europa League, and Conference League.

What is ‘Road To The Knockouts’?

Road To The Knockouts (RTTK) is a FUT promo focusing on the group stages of the three UEFA club competitions, Champions League (UCL), Europa League (UEL), and Conference League (UECL).

The special player items released via this promo will have the opportunity to get two further upgrades! If their club advances to the next stage of the competition they currently play and if their club earns three wins from their four remaining Group Stage matches. 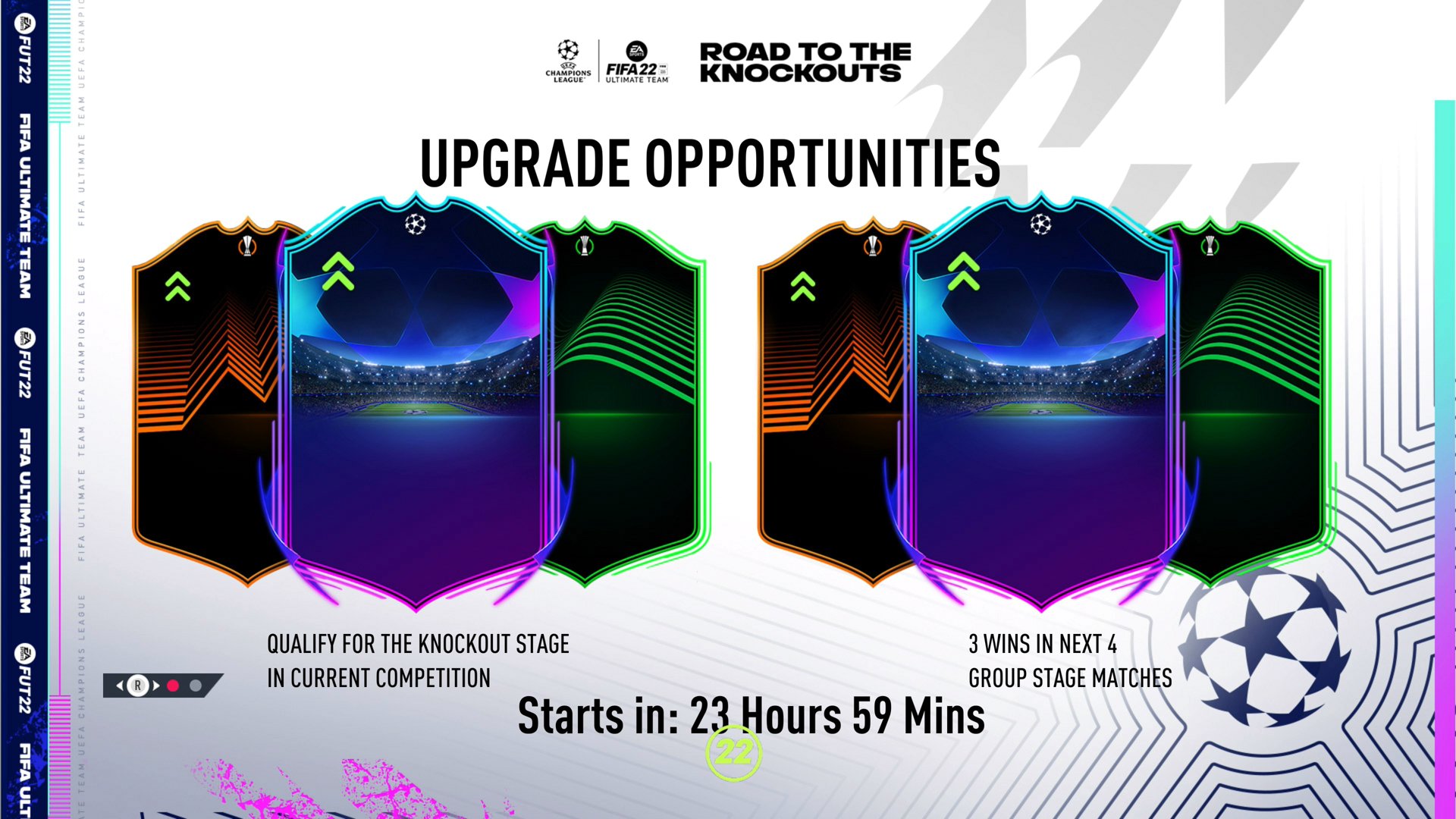 One important fact to remember is that if a RTTK player’s team qualify for the UEFA Europa League from the UEFA Champions League, they are not eligible for the Knockout Stage upgrade. Also the RTTK player doesn’t have to compete in order to earn the upgrades as long as their club fulfill the upgrade requirements.

All RTTK players will be released with boosted ratings. All future upgrades will take up to a few days to update in-game.

Road To The Knockouts Team 1

The first RTTK team is already live in packs featuring a total of 11 players, 7 from UCL, 2 from UEL and 2 from UECL: 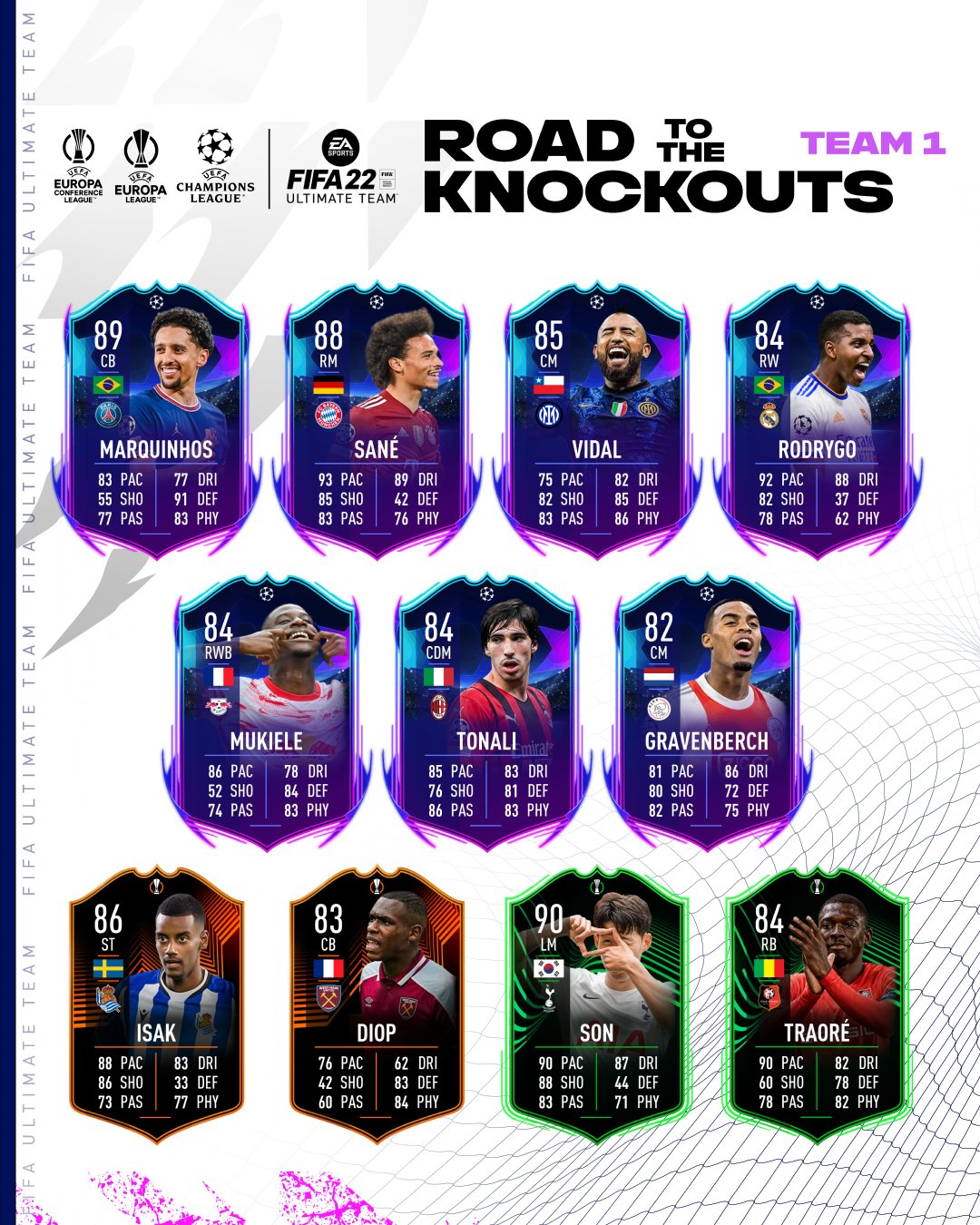 These football aces will go out of packs next Friday, October 22nd. Speaking of aces, be sure to check Vegas Aces.

An additional RTTK card can be earned via a Squad Building Challenge (SBC) and the reward for completing this challenge will be a 87-rated Matthijs de Ligt from Piemonte Calcio (Juventus FC).

Here are the details of the 6 challenges you need to complete in order to get this amazing central back in your club: 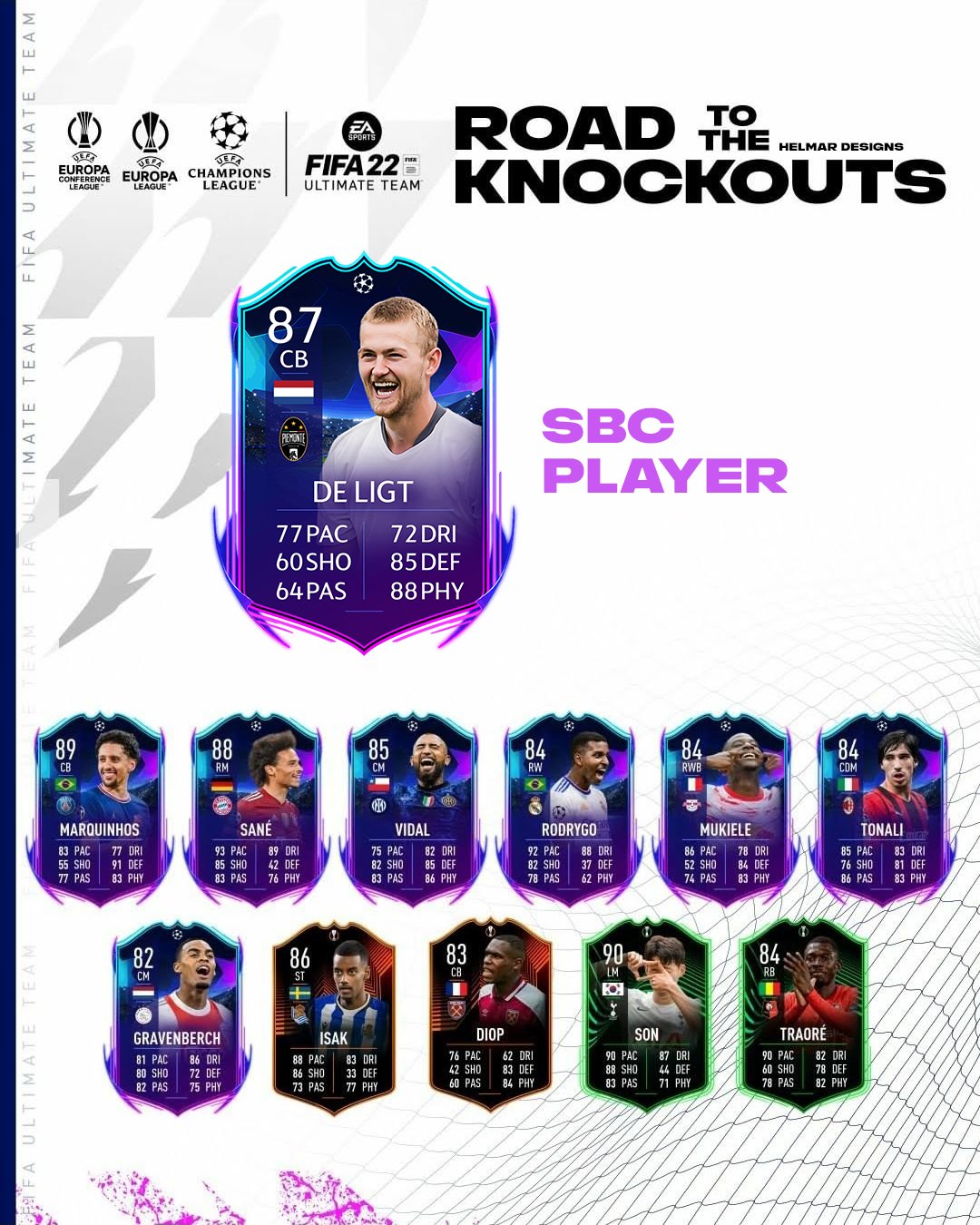 You can find the cheapest solutions for this SBC on FUTBin. The overall cost for this challenge would be approximately 90.ooo coins on PC and 80.000 coins on PS or Xbox.

In the FUT 22 SBC section you can also find another themed SBC called Newcomer’s Challenge that is very cheap to complete and will reward you with one Two Rare Gold Player Pack.

Road to the Knockouts André Objective

For those who like grinding matches and complete objectives, EA Sports dropped an exclusive RTTK Objective for this promo featuring the 83-reated midfielder Benjamin André from LOSC Lille as a reward.

Here’s what tasks you need to complete in-game in order to get him: 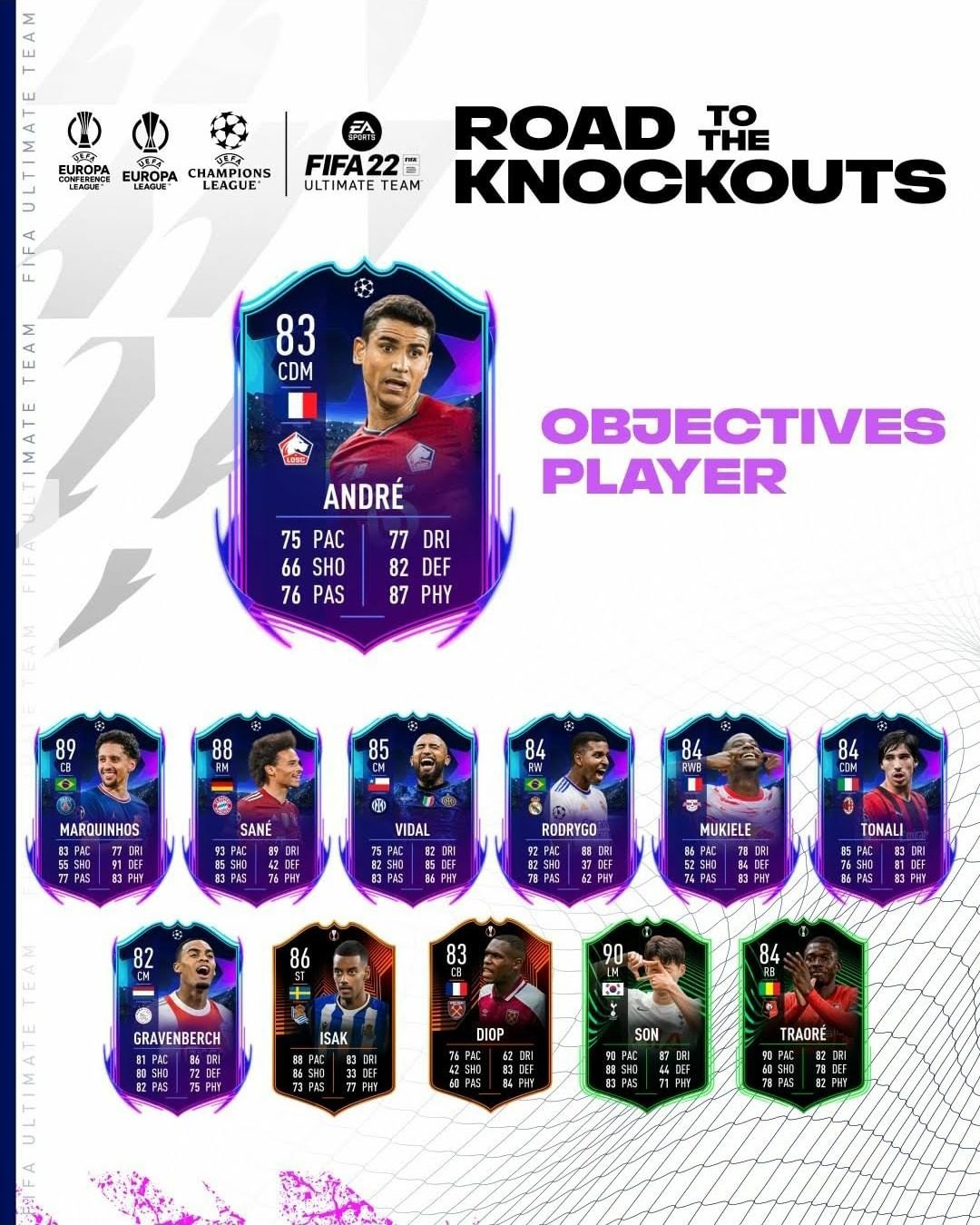 To compete in the Live FUT Friendly: Group Stage Glory mode you will need a team made from exactly 4 leagues and feature max 1 loan player.

Be sure to have French wingers in your squad, a Ligue 1 striker and two CDMs with great passing and vision. This Objective will expire on October 27th.

This year EA Sports started doing ‘Mini Releases’ over the weekend for their promos releasing a small batch of cards and SBCs related to the running promo.

For Road to the Knockouts Mini Release we have the following players now available in packs: 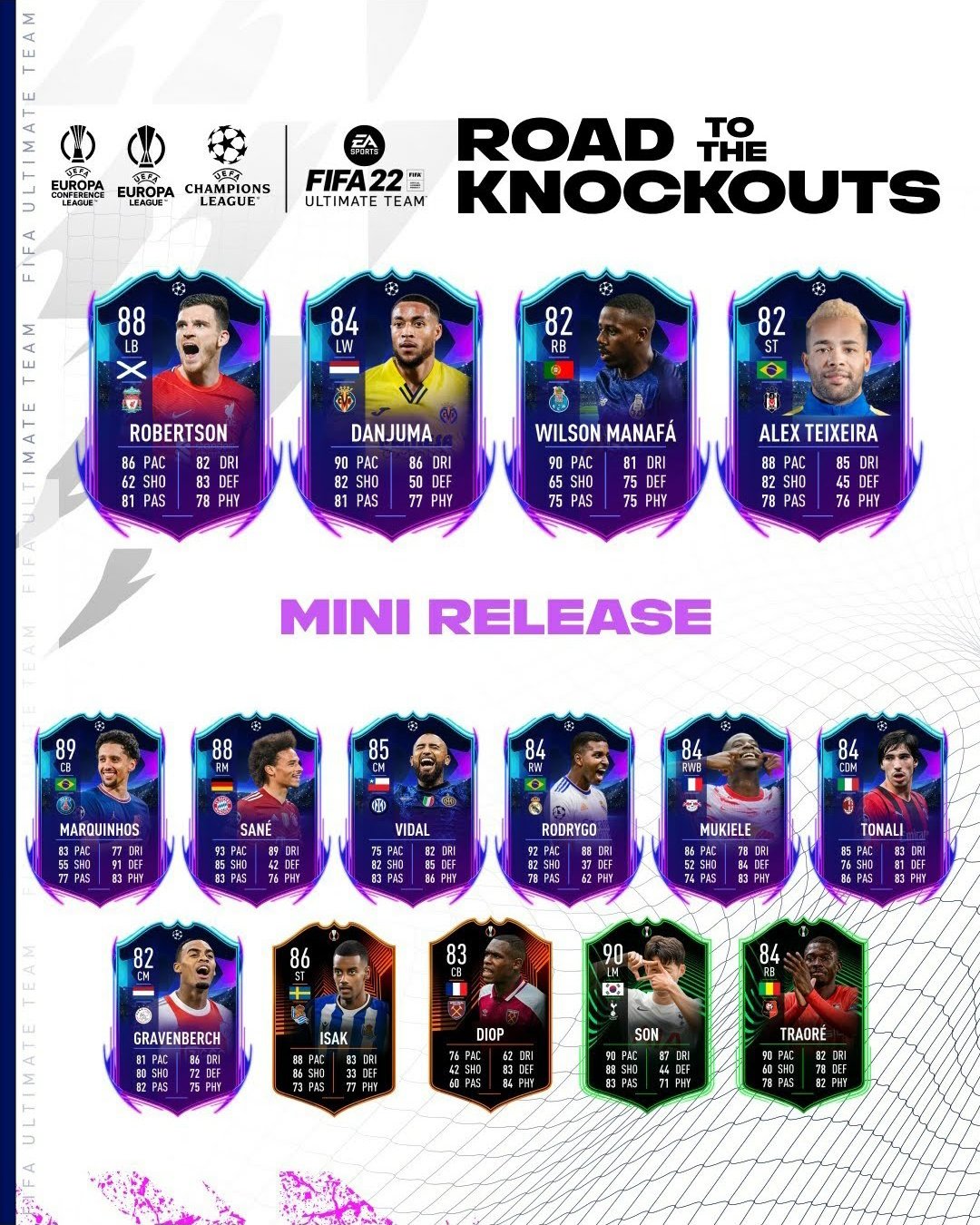 You can get the 86-rated UEL RTTK item for around 100.00 coins which is a decent value for such an amazing card. You can find the best solutions and all the details to complete this SBC here.

🆕 A new UEL RTTK SBC is out! 🌍#UEL |#FIFA22 pic.twitter.com/ZidUVuNMXC

Other themed SBCs that are currently available are A Symphony of Goals and The Underdogs.

A second RTTK team will be released next Friday so be sure to follow us on twitter to stay updated.

EA Sports also confirmed that more UEFA related promos will be released in FUT 22 in the near future “…RTTK is just the start of our celebrations of the UEFA competitions with more to come in the Knockout Stages of the UEFA Champions League, UEFA Europa League, and UEFA Europa Conference League.”