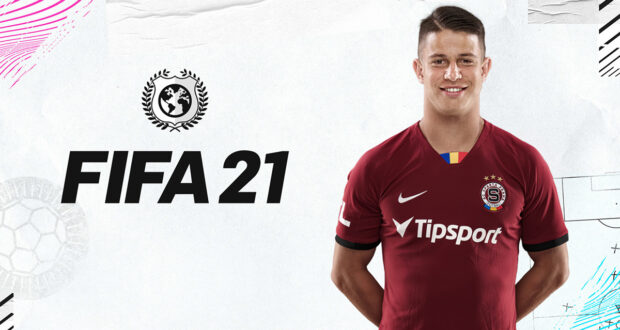 There are some clubs and teams in FIFA 21 that are seriously under appreciated. Not because they are just a tiny club in one of the top domestic leagues in the world but because their leagues simply don’t exist in the game! There are many licensed clubs in FIFA 21 who do not have licensed leagues in-game and are hence slotted into the Rest of the World category.

But what about their players? We discovered some stunning wonderkids from these clubs that you can try in FIFA 21 Career Mode, so let’s take a look at them! 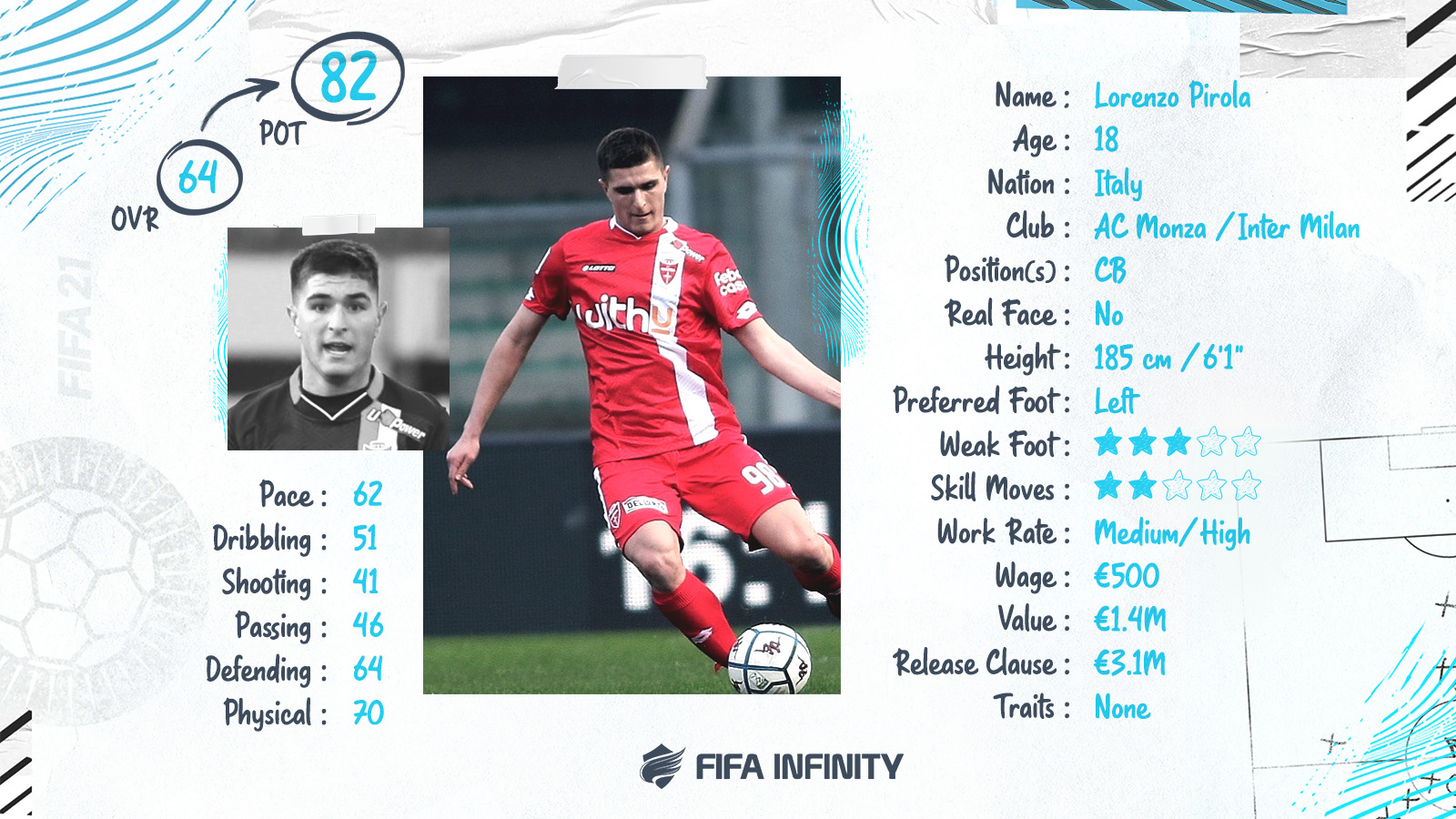 The bright defensive prospect from Italy is the first name on our list. Lorenzo Pirola is an 18-year-old CB who plays for AC Monza, on loan from Inter Milan, in Serie B. With a Medium/High Work Rate, the tall and lanky teenager has impressive Physical stats of 70 and Defending of 64 already. He is valued at 1.4m Euros and has a release clause of 3.1m Euros. He starts at an OVR of 64 and has a potential of 82 which is ideal for a RTG save. 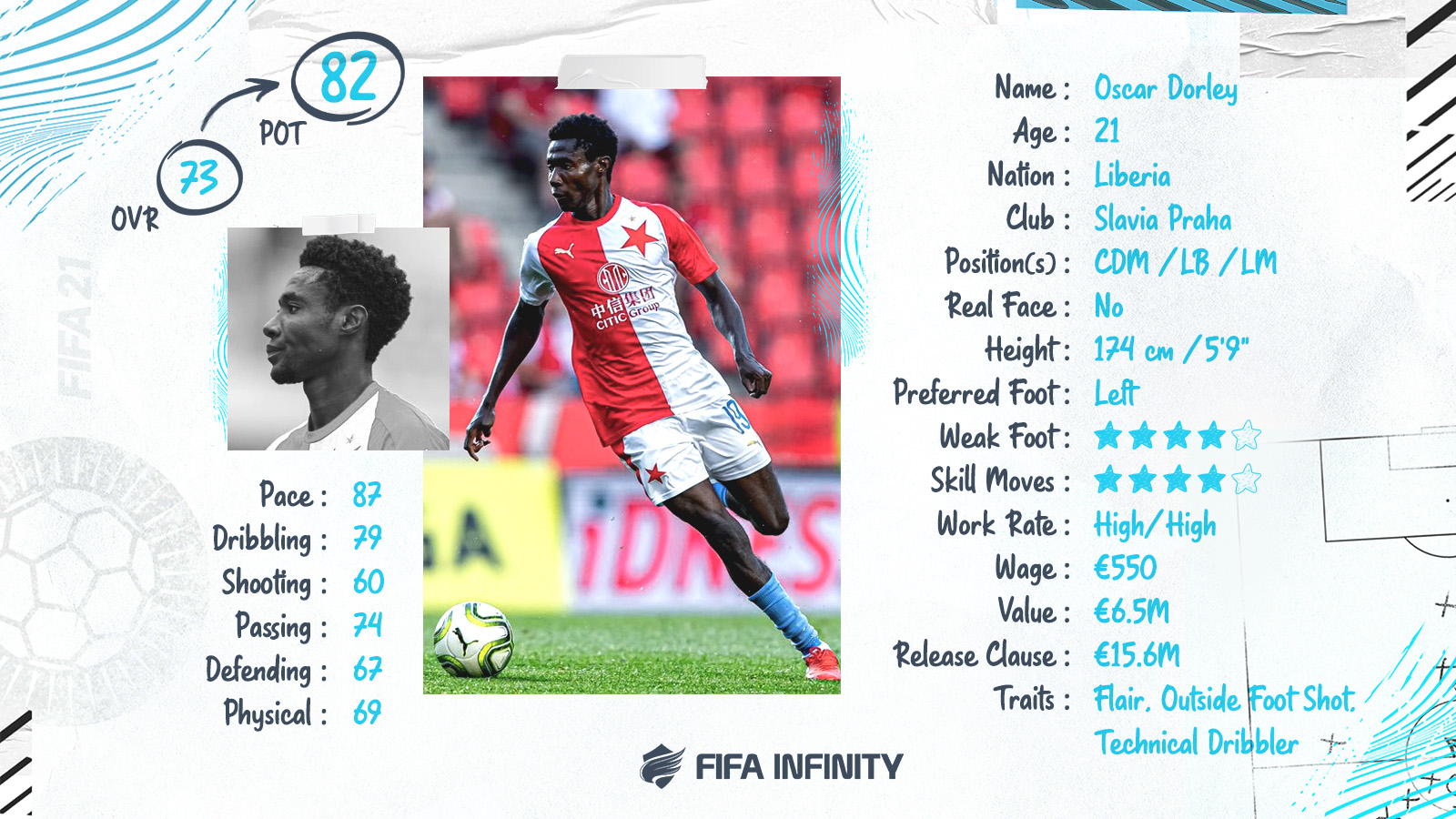 Our next name comes from the lesser-known country of Liberia but he will soon be bringing them in the spotlight just as the legendary George Weah once did. The 21-year-old Murphy Oscar Dorley is a CDM playing for SK Slavia Praha in Czech League who can also play as a LB or LM if needed. SoFIFA indicates that his best position is indeed LM and his 87 Pace is proof. Combined with 79 Dribbling and 74 Passing, along with his High/High Work Rate, the 6.5m Euros valued youngster is an absolute no-brainer to buy. He starts at a 73 OVR with a potential of 82. 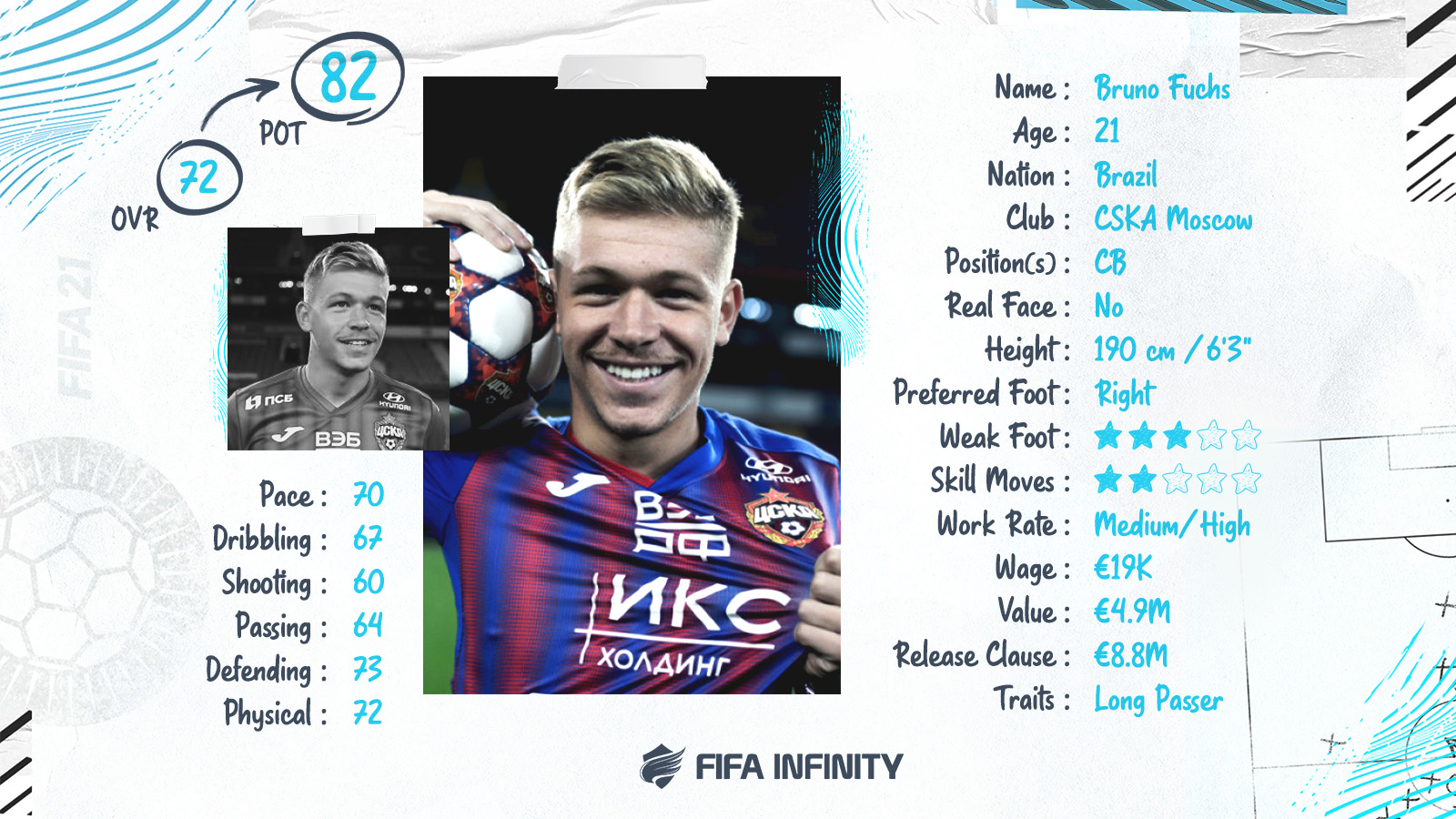 Bruno Fuchs is a 21-year-old CB playing for CSKA Moscow. The young Brazilian is plying his trade in Russia with his 72 Physical and 73 Defence highlighting his stats sheet. The 6’3” (1.9m) tall defender has a High Defensive Work Rate and is currently valued at just under 5m Euros. Marked as a hot favourite with sportsbooks like Betrivers counting on his talent, he starts at an OVR of 72 with a potential of 83. 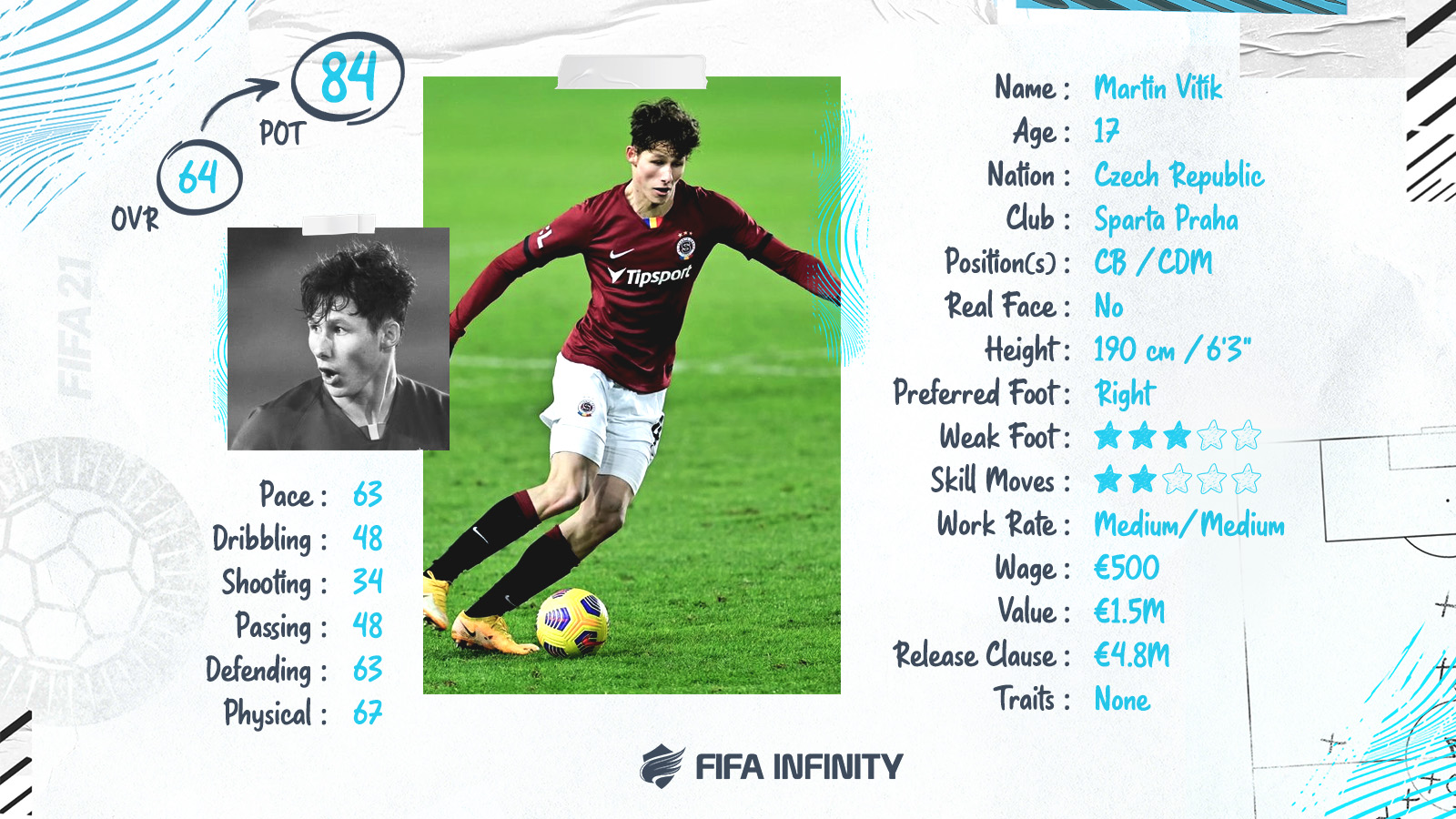 Martin Vitik is a CB playing for Sparta Praha. He can also play as a CDM when required although he is definitely suited just as a defender. The 17-year-old is still an unknown talent but his performances so far look promising in the Czech League. He does not have a 2D face in his FIFA 21 profile (in case that is a deal breaker for you) but his price tag of 1.5m is a fair enough compensation. He has a starting OVR of 64 with a potential of 84. 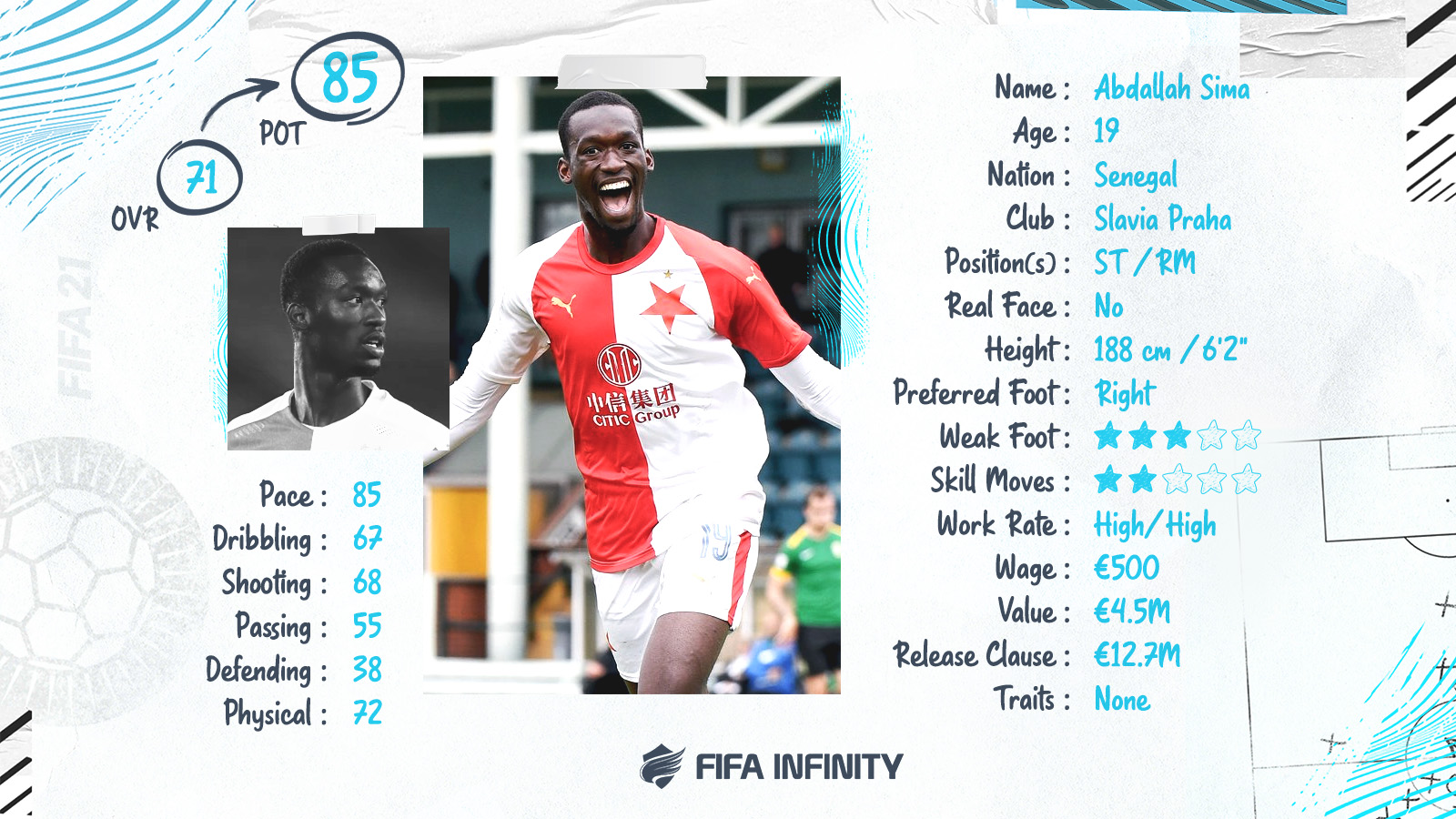 Another player with a blank FIFA 21 player portrait, 19-year-old Abdallah Sima is a wonderkid who is slowly turning heads. The Senegalese striker plays for Slavia Praha and can also switch and play as a RM, his real-life position currently. With an explosive Pace of 85 and 72 Physical, he is a striker that defenders already fear. Valued at a respectable 4.5m Euros, he has a release clause of 12.7m Euros. He starts at an OVR of 71 with a potential of 85. 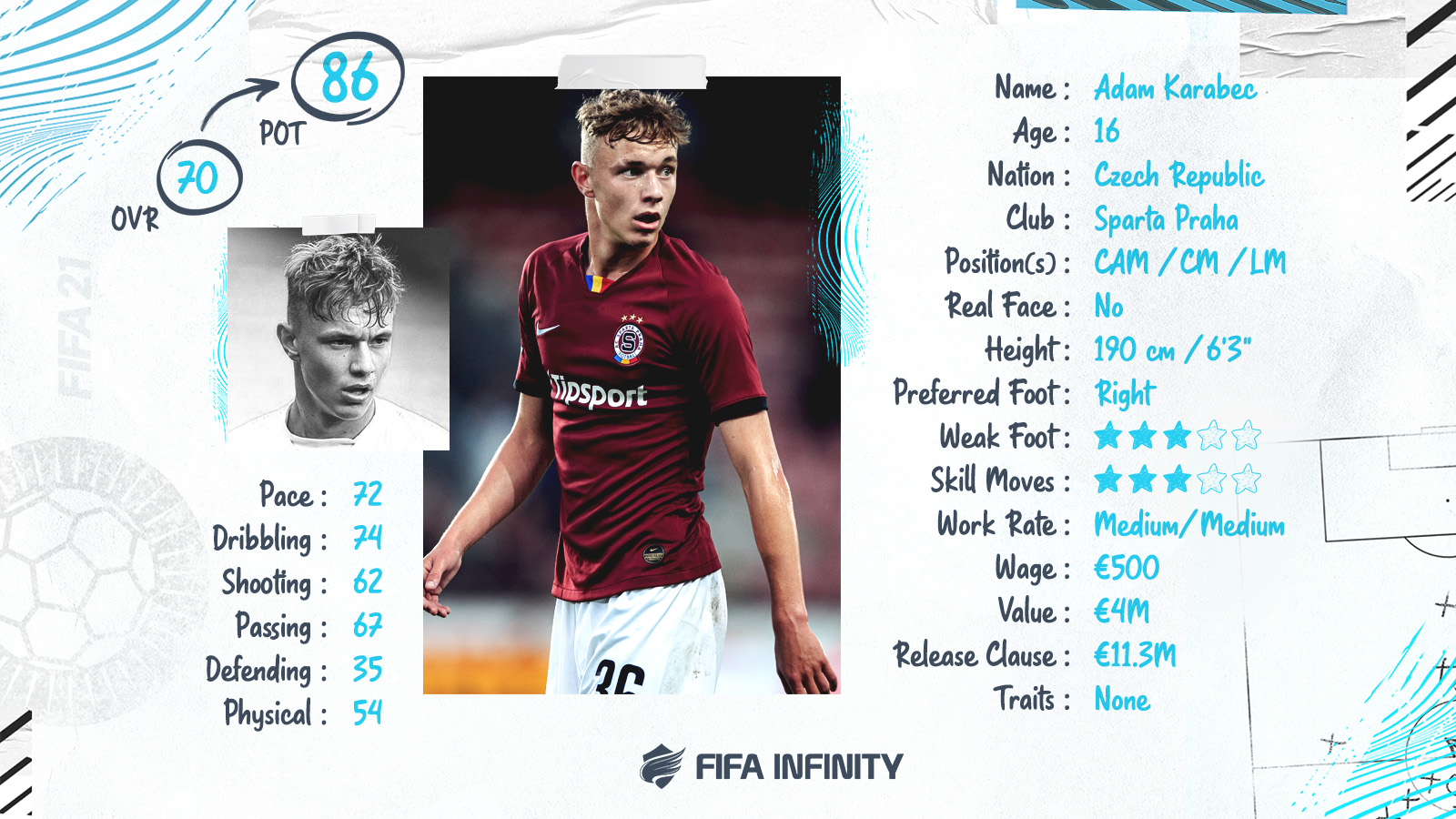 One of the most sought-after players on the block, Karabec is making a name for himself rapidly. The 16-year-old midfielder plays for Sparta Praha and operates primarily as a CAM but can also play as a CM and LM. For such a young age he has impressive starting stats such as 74 Dribbling or 72 Pace and is rather cheap, valued at 4m Euros and with a release clause of 11.3m Euros. He has a starting OVR of 70 and with an impressive potential of 86. 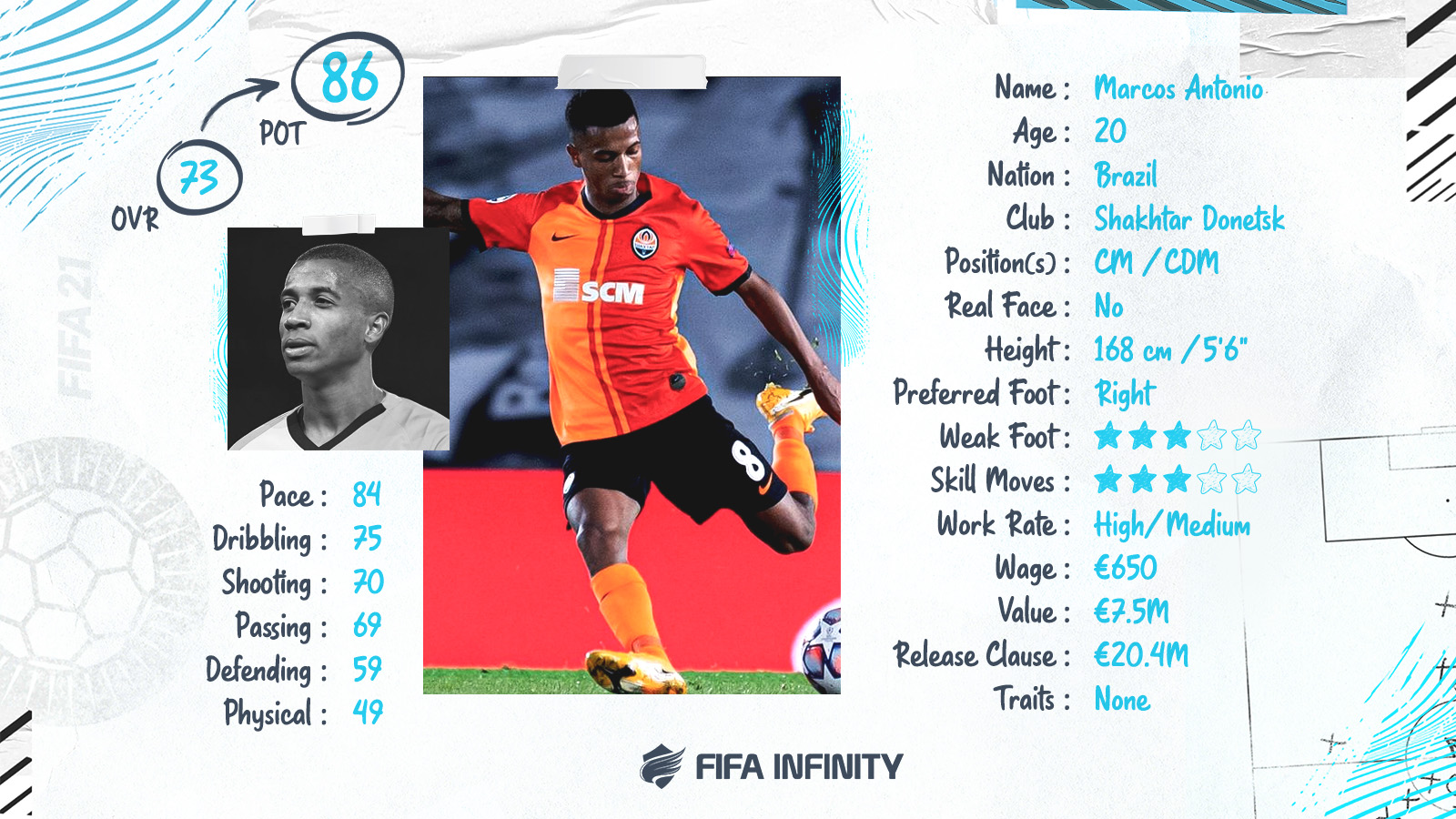 Marcos Antonio is one of the best players you can find in the Rest of the World category. The 20-year-old Brazilian is a midfielder who plays for Shakhtar Donetsk and is already a first team starter. Antonio can play as a CM and CDM and is incredibly quick at with his 84 Pace. He also has 75 Dribbling and 70 Shooting which is pretty good for a midfielder. He is valued at 7.5m Euros and has a pricey release clause of a little over 20m Euros. He starts at an OVR of 73 and has an amazing potential of 86. 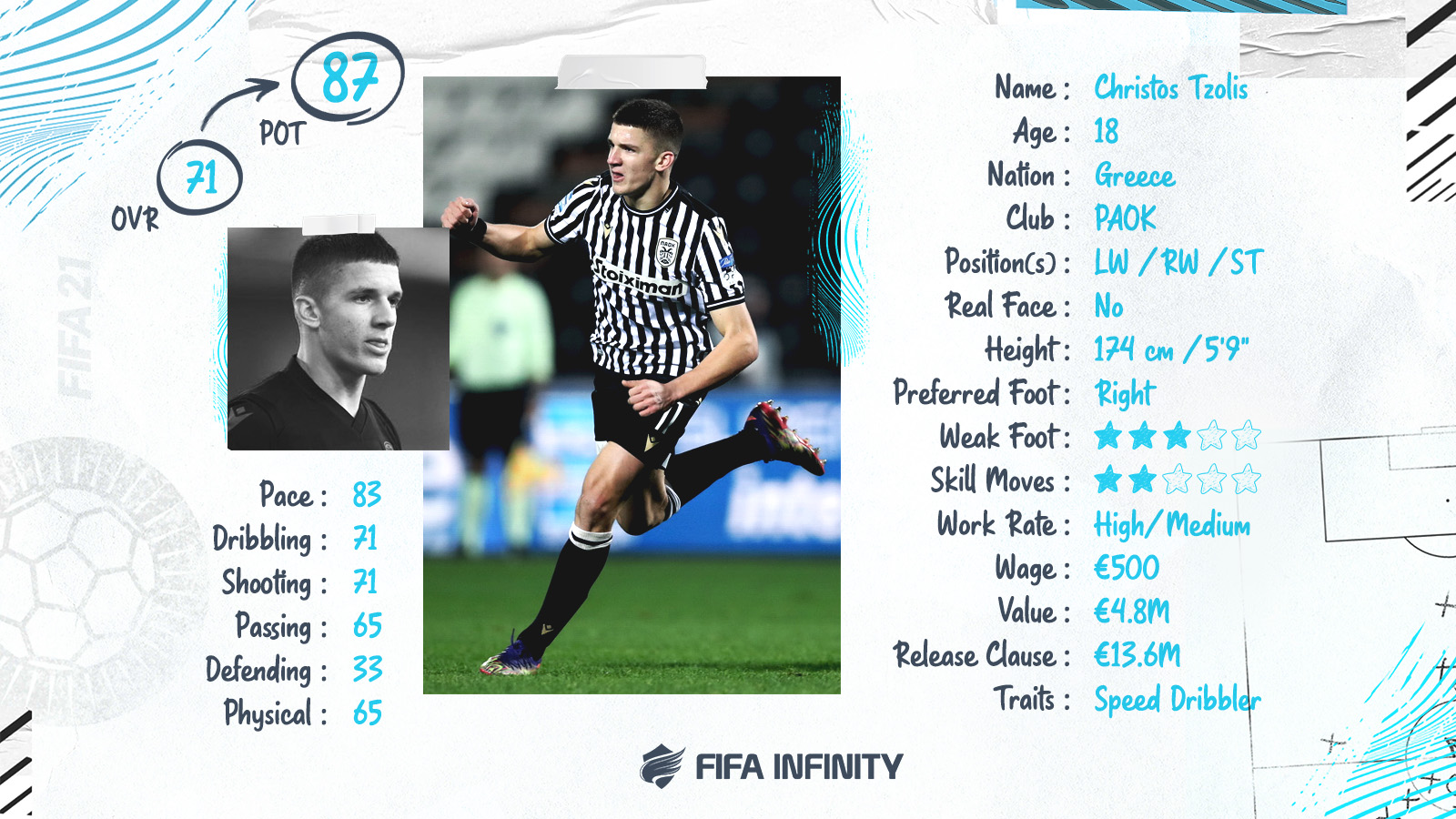 A remarkable attacker, Christos Tzolis marks the new era of wonderkids from Greece. The 18-year-old winger can play as a LW and RW and even ST if needed. The speedy winger playing for PAOK, he possesses 83 Pace and 71 Dribbling with 71 Shooting. Definitely first team material for most top clubs in the world, Tzolis is valued at just under 5m Euros with a release clause of 13.6m Euros. His OVR starts at 71 and Christos has a stunning potential of 87. 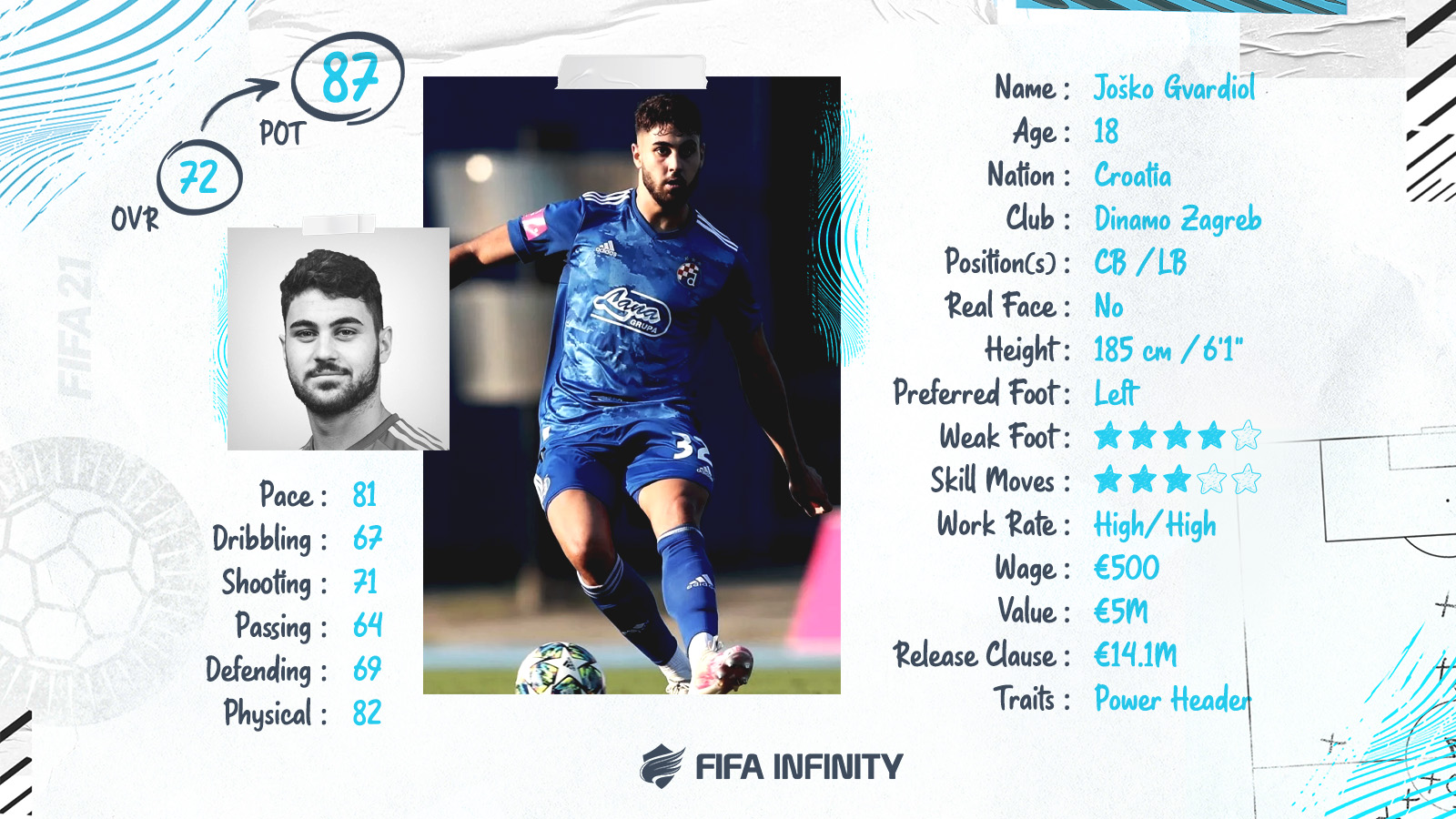 We now have a wonderkid from one of the best clubs in the Rest of the World category, Dinamo Zagreb. Josko Gvardiol is an 18-year-old defender who plays as CB but can also play as a LB. Gvardiol might just be the next big thing to come out of Croatia and the player even possesses a 4-star Weak Foot with 3-star Skill Moves which is rather impressive for his current position. With 81 Pace, 82 Physical and High/High Work Rates, we will most likely see him playing in a top European club in the near future. He is valued at 5m Euros with a release clause of just over 14m Euros and starts at an OVR of 72 with an immense potential of 87. 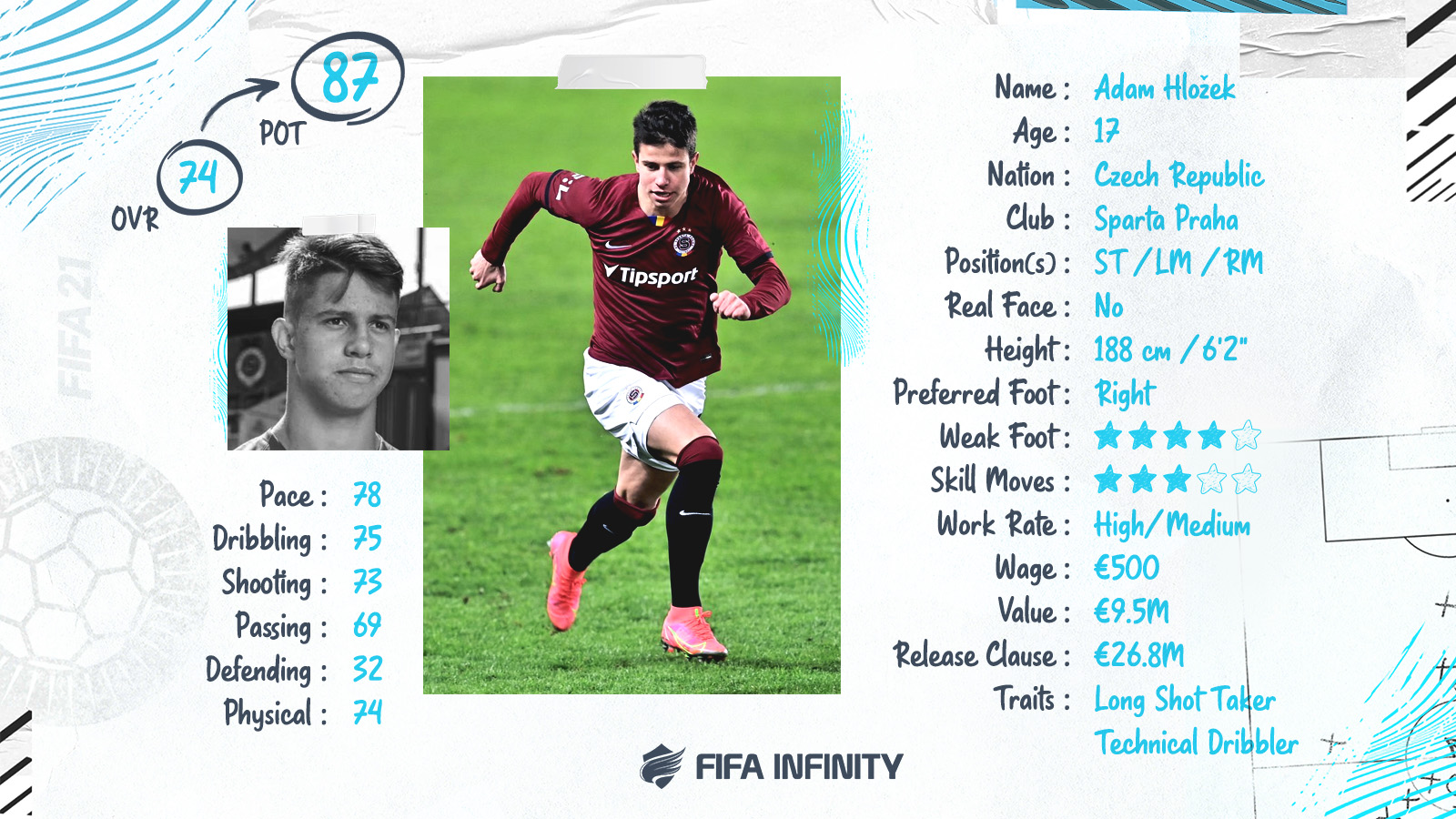 We have saved the best for last. 17-year-old Adam Hlozek is a teen sensation and we definitely expect him to make his way into an European powerhouse soon enough. The tall (188 cm / 6’2″) striker is another amazing prospect from Sparta Praha. An aerial threat with 78 Pace, 75 Dribbling, 74 Physical and 73 Shooting, there is barely anything you cannot do with the Croatian in your squad. He is the priciest of the lot, valued at 9.5m Euros with a release clause of 26.8m Euros. He has a starting OVR of 74 and a potential of 87.

That is an explosive list of wonderkids who are some of the best ones you can find in the entire game. Make sure you grab them before rival clubs do in FIFA 21. As always, happy scouting!