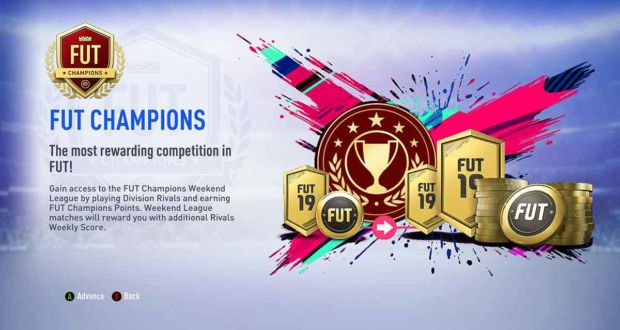 If you plan to compete in the FUT Champions in this guide you will learn how to qualify for the tournament, how the tournament system works and what in-game rewards you can get.

For starters, FUT Champions is the most competitive online mode in FIFA 19. Everyone can participate if they manage to qualify for the Weekend League and the best and most consistent players will even get invited by EA Sports to their competitive gaming events.

So you may ask, how do I qualify for the Weekend League?

Well, with the introduction of Division Rivals this year your chances to qualify for the Weekend League have been greatly improved. In FUT 19, you will have the FUT Champions Points as part of Division Rivals – every game you play in Rivals will take you one step closer to qualifying for the Weekend League using these Points. The number of FUT Champions Points earned for each game is dependant on your performance and current Division. The better you play, the more points you earn. Each Division has a multiplier on your FUT Champions Points, so the higher the Division you are in, the faster you’ll rack up Points.

The FUT Champions Points system also changed how Weekend League re-qualification works. Last January, the number of wins required to re-qualify to the Weekend League in FUT 18 dropped from 18 to 11.

In FUT 19, starting at tiers with 11 wins or more, the rewards earned will include the full amount of points required to join another Weekend League. Additionally, every tier below 11 wins also includes some FUT Champions Points that will get you closer to another attempt at qualifying for the Weekend League.

With the likelihood of coming up against tougher opponents in the Weekend League, your Skill Rating, which determines your Division in Rivals, remained unaffected by the matches you play in Weekend League.

From the start of FUT Champions in FUT 19, you will have the option to play up to 30 games during each Weekend League on PlayStation 4, Xbox One, and PC.

This year you will also have the inclusion of Player Picks, giving players more choice over the content with which they want to build their dream squad. Weekly Reward Player Picks will be replacing the Monthly Reward Packs from FUT 18, giving you a choice between which red FUT Champions player items you want to add to your squad.

Currently, once you reach the Silver 3 Rank in a Weekend League, you would start to receive these Items are part of your rewards.

Just a reminder that for each Player Pick Item, you only get to choose one of the FUT Champions TOTW Player Items from it, regardless of how many different Items you get to choose from.

Rewards will be distributed on Thursdays at 18:00 UTC to applicable accounts that had completed the minimum 5 matches that were required to be ranked. Some results will be reviewed by EA before distributing the reward packs and there may be a slight delay.

Rewards can be claimed both in-game, and via FUT Web and the FIFA 19 Companion App.

Everyone starts each weekend fresh at zero form, moving up or down with each win or loss. In football terms, match form of W/L/W/W/W would result in a +3 form. Players with similar form are then paired in matchmaking.

The result is that players that are better than average in the Weekend League (which is already a very skilled group of players) will quickly boost their form. The higher their form gets, the more challenging the competition becomes. Only the best of the best can consistently beat players with high form and attain Elite and Top 100 status.

The second key piece to matchmaking is location. Players are matched based on their location and proximity to our dedicated game servers to ensure quality matches.

The Champions Channel was introduced in FUT 18 and you can find it in FUT 19 as well. This feature can help you learn from the Top 100 finishers every weekend in FUT Champions. You can view the match replays of the best players and learn their skills and tactics. One of the major change introduced this year is the addition of controller inputs, which allows you to see buttons the top players are pressing in every scenario of play, including during instant replays.