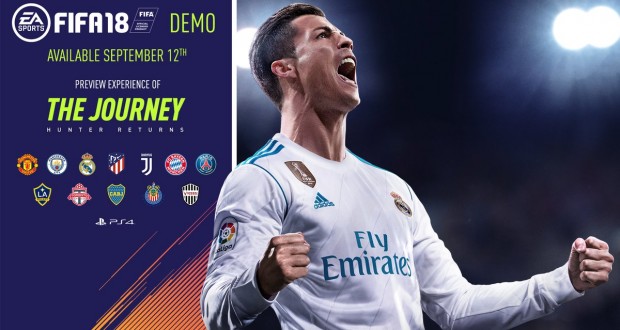 It’s official! FIFA 18 Demo will be released today featuring the next content:

Experience FIFA 18’s Real Player Motion Technology, a groundbreaking animation system that unlocks a new level of realistic, responsive, and fluid gameplay. Player Personalities give some of the biggest stars in the world the distinct traits of their real-world counterparts, Team Styles let players mimic their favourite clubs’ distinct on-field tactics, and Immersive Atmospheres bring some of the football world’s most famous stadiums to life during matches.

Plus, enjoy the brand-new broadcast overlays for LaLiga and MLS, as well as vibrant and region-specific sights and sounds that make football’s biggest stadiums come to life.

Play as one of these 12 top football clubs in Kick Off mode:

Play in one of these 4 stadiums from around the world:

With new high-res crowds, regionalized atmospheres, player banners, on-pitch graphics and more, the most immersive football experiences are brought to life in FIFA 18.

Alex Hunter is back for a second season, and rumour has it, he’s on the move. Preview the next chapter in Hunter’s story in the Demo as he goes global alongside a star-studded supporting cast featuring Cristiano Ronaldo, Antoine Griezmann, James Harden, plus new playable characters. The future is bright, and the world is talking about Hunter… but life in football isn’t always fair.

Are you excited for the FIFA 18 Demo? Please let us know in the comments.