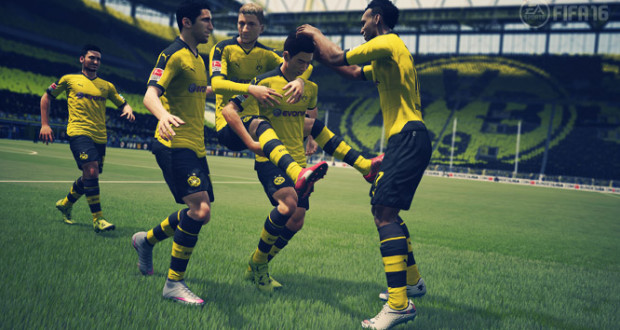 Even though we are only a few days away from the full game release, for those who haven’t tried the FIFA 16 demo yet they can do it by downloading it from here. Also if you have issues with the demo be sure to check this page.

No less than 16 Brazilian clubs are set to appear in FIFA 16 and you can view which team are to be included in this post.

There will be over 30 leagues and 650 teams in FIFA 16 this year and you can view the complete official team list here.

If you wanna learn how to pull off the new FIFA 16 skills be sure to watch FIFARalle’s tutorial bellow:

If you wish to learn all skills in FIFA 16 then to check out this post.

Celebrations are a big part of the game and in FIFA 16 there are 11 new celebrations that you can perform by watching the next video:

Bellow you can find lots of links with player ratings in FIFA 16 ranging from the best dribblers to strongest player and more:

If you want to see what items will feature in the new FIFA 16 EASFC Catalogue you can do it by viewing this post.

The new FIFA 16 soundtrack list has been revealed two weeks ago featuring 42 new songs that you can listen and view right here.

Xbox One owners can already play FIFA 16 thanks to EA Access. For more details check here.

Lots of new security and market updates are coming to FIFA 16 Ultimate Team this season from enabled transfer market on the web and companion apps to seperated console markets. For a more detailed description of these new features please check out this post. With these new updates, the ban process for selling or buying coins in FUT is more severe and you can check it out here.

The web app and mobile companion app are available as of last Tuesday and you can access it on the web here or on mobile by downloading it on to your prefered OS:

Note that this year you’ll need at least 1GB of RAM to run the app!

If you’re already using the FUT 16 app you’d know that the first TOTW of the FIFA 16 season is live with IN-Form players like Payet, Guarin or Cristiano Ronaldo:

The new FIFA 16 TV ad has been revealed to the public this week featuring lots of sport stars like Leo Messi, Sergio Agüero, Alex Morgan, Kobe Bryant or Pelé:

PS3 and Xbox 360 console owners who intend to buy FIFA 16 can check out the game features in this post.

Thirteen players from three different women’s national teams have been removed from the FIFA 16 roster a few days ago at the request of NCAA. For more details on this subject click here.

The full FIFA 16 game will roll out worldwide on September 22nd with a patch update already in line for it that will fix the following: