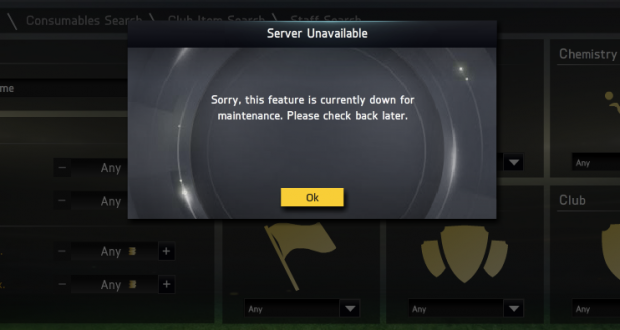 If you’re a web app or companion app user you would have noticed by now that the transfer market is not working anymore and that is because EA Sports have disabled it to “perform important maintenance” for an undefined period of time. Last time they did this, which was on FIFA 14, the transfer market on the web app stayed offline until the release of FIFA 15. The main reason for this action was due to the coin selling business that EA Sports are trying to bring down. Disabling the transfer market on the web app was the only way that EA Sports could prevent coin selling websites to run their autobuyer softwares and generate coins to sell. As of this article being written the market is already crashing with card prices going down by a lot. The market is still up and running on the consoles and you can continue to buy and sell players just like before. Now the big question is: Will the transfer market return to the web app? The answer at this point is that only time will tell, but with the current rumors circulating the community and the previous FIFA 14 occurrence, it’s less likely to ever happen. But who knows?

TOTW 22 brings some really interesting IN-Forms in the game like Mertens, Kane, Depay or the FUT12/13 nightmare Welliton:

These in-form players will be available in pack from 11th February 6:00PM – 5:30PM 18th February. You can view the team in the Web App  or more detailed at FUTHead or FUTWiz.

To celebrate the biggest football event in Africa (AFCON 2015), a special Team of the Tournament (TOTT) squad has been released in FUT 15. These players have been selected based on their performances throughout the entire tournament:

These in-form players will be available in pack from 13th February 12:00AM – 6PM 16th February. You can view the team at FUTHead or FUTWiz.

Hope you have your Brazilian squad ready because you can now use it to play in the latest FUT 15 Tournament called Carnival Cup and earn yourself a good amount of coins and some gold packs:

A few days ago a reddit user posted two images showing a legit FUT 15 Kagawa card at Manchester United! This isn’t the first type of card to appear in Ultimate Team 15 having previously featured another three players at their old clubs: Negredo, Remy and Falcao. A few hours later after the pics were posted, another reddit user pointed out that the screens were actually taken from a video of EA Sports Poland YouTube channel that featured the card by mistake in a 1 vs 1 FIFA 15 match between two Legia Warsaw players. For those who hoped to get their hands on the card will have to forget about it because the card is on one of EA’s official FUT accounts and will never hit the auction house.

Fancy some FIFA 15 articles and guides? Here are the best of this week:

– What was the best FIFA game ever? Have your say

– FIFA 15: A bluffer’s guide for parents

– 7 FIFA 15 Videos That Prove The Game Absolutely Hates You

– FIFA 15 Simulation: The Slowest XI vs The Worst Positioning XI

– 5 non gameplay tips that can help you improve your game

– My experience with “handicap”, what it is, and how to avoid it (Tried-and-true)

See you next week with more exciting FIFA 15 news guys!