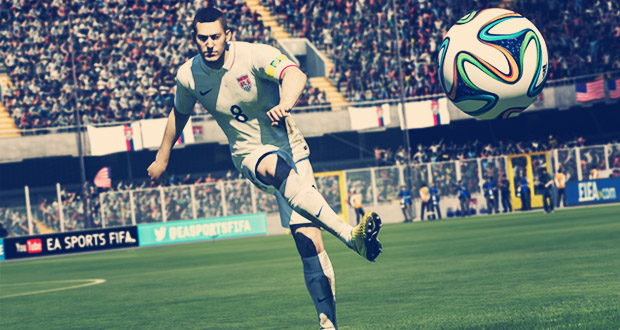 Here we are with the third FIFA 15 News roundup post that will cover all the news released since our second FIFA 15 news post!

EA Sports like to tease their fans with these short gameplay features trailers like the following one that will show us the “Emotion and Intensity” on the pitch in FIFA 15:

Thanks to this new trailer we know that FIFA 15 will finally have realistic scoreboards like the Barclays Premier League (at 1:36) and more players with realistic faces like Lambert, J.Allen, Oscar, Ramires, Mignolet, Boruc and J.Fonte.

A user of the EA forums called Steph3998 had the chance to test a beta version of the game a few weeks ago and confirmed that the next players will have real/updated faces in FIFA 15:

Some in-game pictures have been leaked on the web from the beta testing events around the world organized by EA. You can see bellow screens of the FIFA 15 start screen or the kit selection menu:

Serie A fans will be delighted to know that their favourite league will be fully licensed in FIFA 15. EA Sports and Lega Serie A reached an agreement that will include the following features in the new FIFA game:

It looks that FIFA 15 will be the first FIFA game to feature real referees! EA Sports and Professional Game Match Officials Limited (PGMOL) have reached a long-term partnership back in January this year. Since FIFA 14 was already released when this partnership was made, we expect the real English referees to be added in the upcoming FIFA. PGMOL provides match officials for three major English football bodies, Premier League, The FA and The Football League.

EA Sports managed to license the next teams only because they were included in the whole FIFA World Cup final tournament license so at this point we don’t know which one of them will be in FIFA 15, maybe all of them or none, who knows:

The Mexican club, Puebla FC, will be sponsored by EA Sports for the next three seasons following this announcement on their official website. The sponsorship deal will allow EA Sports to add the FIFA 15 logo on the their new 14/15 jerseys. There are no information if players from this team will have customized faces but with the club’s recent transfer of the Mexican legend, Cuauhtémoc Blanco, we at least expect his face to be in the game.

Another team that reached a sponsorship/partnership agreement with EA Sports is AS Monaco! Although there were no announcements regarding this partnership, the club’s website has listed EA Sports as one of their main partners.

Two new HQ screenshots have been shared by EA Sports last week, one with Lavezzi and one with Clint Dempsey:

Arturo Vidal was announced as the official ambassador for FIFA 15 in South America and will be the cover star along Messi in that region.

Tim Cahill confirmed on his twitter account that he will join Messi on the Australian FIFA 15 cover.

And it seems that Antoine Griezmann will be the FIFA 15 cover star for France after EA France twitted the he was at their headquarters yesterday to test FIFA 15! Maybe he will also get a customized face?

Thanks to the US software classification body we now know that the 3DS version of FIFA 15 will include the Street Mode! In their rating summary of the game they wrote the following:

This is a soccer simulation game in which players engage in realistic matches with teams across international leagues. Players can practice penalty kicks, assign on-field strategies, and participate in a variety of game modes (e.g., Streets, Career, Tournament, Training) to improve their ball-handling skills.

EA Sports France marketing director, Antoine Cohet, confirmed that the French Ligue 1 will have realistic stadium chants for many teams like PSG, O.Lyon, Bordeaux or O.Marseille.

Don’t miss these FIFA 15 related articles of the week:

And if you’re looking for a fresh desktop wallpaper then you can download the official FIFA 15 wallpaper bellow:

More news and features will be revealed at the Gamescom venue on August 14th in Germany, Cologne!

Thanks for reading this news post! See you next time!