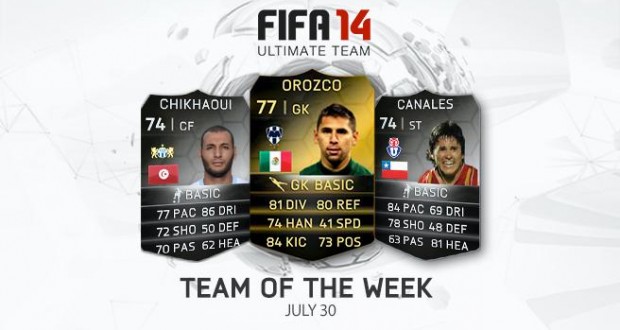 This week EA Sports banned almost 25.000 accounts on FUT 14 that were affiliated with auto-buying  softwares and coin selling. In this ban avalanche there were also innocent users who didn’t broke the Terms of Service but still got their accounts suspended. EA Sports FIFA dev team are aware of this mistake and through fifa community manager, Rob Hodson, they said that they are investigating the issue and that there is no need of action of those who were affected.

If your were banned by mistake and didn’t got your account re-activated please contact EA’s support here.

These IN-Form players will be available in packs from 30th July 6:00PM – 5:30PM 6th August. You can view this team in the Web App or more detailed at FUTHead.

EA Sports and MLS teamed up to give you the chance to win a trip to the MLS Cup final in December! To enter in this contest all you have to do is play and win the MLS Dream Weekend Tournament between August 1 and August 6 in FIFA 14. Each tournament victory is worth one entry! There is also a secondary prize consisting of 10 x 100,000 FUT 14 coin prize packs that will be awarded to 10 lucky winners.

Contest is valid ONLY in Canada (excluding Quebec) and the United States.

If time allows you please check these FIFA 14 related articles and guides of the week:

– Players Guides by the numbers EP1: Serie A GK’s

See you next week with another news roundup post!