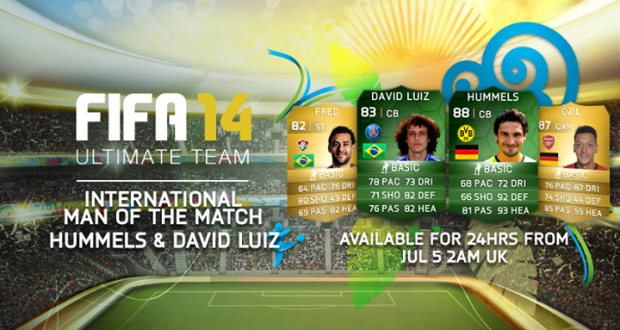 After Teams Of The Matchday, EA Sports released Team Of The Group Stage in FUT 14 featuring the best players of the 2014 FIFA World Cup Group Stage phase:

These IN-Form and iMOTM players will be available in packs from 2nd July 6:00PM – 5:30PM 7th July. You can view this team in the Web App.

It has been confirmed that David Luiz has been transferred to his new team PSG in FUT 14! From now on his iMOTM and NIF (Not-In-Form) cards will now be at PSG whenever you get him in a pack as you can see in the screen bellow:

The FUT 14 Summer Transfers will start after the 2014 World Cup is over!

This week’s FUT Legends Spotlight is taken by the Italian legend, Fabio Cannavaro! This week is your best chance to find him in packs than in any other weeks of this season.

Last news we have for you is that Dane August Rosenmeier from Denmark won the 2014 FIWC! He beat David Bytheway 3 – 1 in the Grand Final hosted in Rio de Janeiro and with this title he received a cheque of 20,000 $ and will travel to the 2014 Ballon d’Or Gala to rub shoulders with the world’s best footballers.

Thanks again for reading this week’s FIFA 14 news! See you next week!