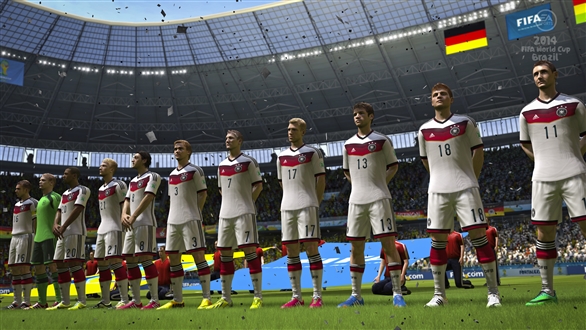 EA Sports officially announced the 2014 FIFA World Cup Brazil game two days ago! The game will be released on market on April 15th in North America and April 17th in Europe and it will be available only for Xbox 360 and PS3 consoles!  As you can could understand the game won’t get released for PS4, Xbox One and PC except the Next-Gen version of FIFA 14 who will have a range of World Cup content and tournaments within FUT that will be announced later on. Bellow you can view all the game features, the first screenshots and the teaser trailer:

–          Response Dribbling – Turn quicker at every angle and keep the ball under control. Using the left trigger, fans will find success beating opponents at slow speeds with the new dribbling system.  Plus, use all-new new flicks, dribbles, and a new Brazilian-inspired skill move to beat defenders.

–          Pinpoint Passing – Key passing improvements and new animations result in crisper, more accurate, direct, and responsive passing. Ground crosses, outside of the foot curling crosses, and personality given to clearances make moving the ball more satisfying and precise than ever.

* This feature is only available in English builds of the game

Stadiums – 21 new stadiums, including all 12 authentic stadiums in Brazil.

The 2nd batch of FUT 14 Winter Transfers are now live in packs! You can view the transfer list here.

After Jay Rodriguez, Omar Gonzalez & Eddie Johnson are the latest players to get their Ultimate Team 14 Pro Player cards! You can see them bellow with their amazing cards:

Remember that these cards are untradable!

TOTW21 brings us some great IN-Form players like Chiellini, Sneijer or Oxlade-Chamberlain:

These IN-Form players will be available in packs from 5th February 6:00PM – 5:30PM 12th February. You can view this team in the Web App or more detailed at FUTHead.

Portuguese legend Rui Costa takes the Spotlight! This week you have the best chance to find him all year.

As every week, we search the web for the best FIFA 14 guides and articles and bellow you can find this week’s collection:

In ther news,  EA Triple A are holding a competition where you can win a signed FIFA 14 cover by Juan Mata! To enter the competition visit their facebook app .The competition ends on the 19th February 2014 at 18:00.

And we end this week’s news with the official Best Goals of the Week #16: