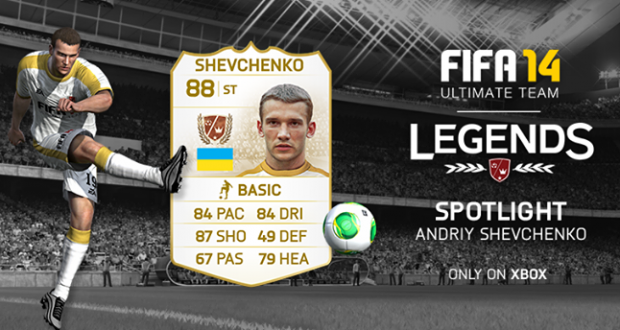 The third FIFA 14 update is finally available on Xbox One! The PS4 users got it over a month ago but for some reason Microsoft delayed the release of the update for their users. The new title update addresses the following:

After the announcement of the FIFA 12 online servers shutdown EA also decided to close the online services for FIFA Street 2012 on 28th of March 2014!

In other news, Electronic Arts has signed a long-term agreement with Professional Game Match Officials Limited (PGMOL) where EA SPORTS becomes the new principal partner for PGMOL up until the end of the 2018/19 season.

Eto’o is leading in the line in our new Team of the Week! See the full squad:

These IN-Form players will be available in packs from 22nd January 6:00PM – 5:30PM 29th January. You can view this team in the Web App or more detailed at FUTHead.

The Milan legend Shevchenko takes the Spotlight! This week is the best chance to find him all year.

On this week’s episode, Matt and Darren take a look at shooting in FIFA 14:

Here’s another collection of amazing guides and related FIFA 14 articles:

– A brief guide for getting the best out of Messi. (EA)

This week EA SPORTS made a special GOTW episode dedicated to Team Of The Year players: