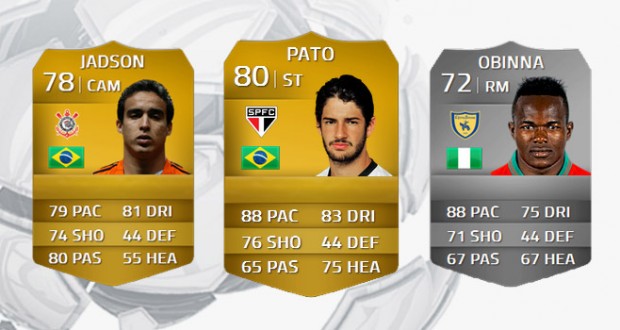 This week’s news post will feature news from both FIFA 14 and FIFA World Cup 2014 game!

Let’s start with the FIFA 14 news! After many months EA Sports have finally managed to find a fix for the FUT 14 transfer market search bug! The fix will be implemented before the end of next week and you will also get 2 free untradeable Gold Rare 25K packs as a thank you for your patience. The packs can be claimed from the FUT Store on your console/mobile/PC game or the mobile companion app (not the Web App). Be sure to claim them before Friday April 11th at 11:59pm UK (3:59pm PT) or they will no longer be available.

This weekend you can enjoy a new FUT 14 tournament called Bronze Bombers. To participate you’ll need a squad full of bronze players (Starting XI & Subs)! Winning the tournament will get you the following rewards:

The offline difficulty is Profesional and the tournament will end on April 9th!

Bale, Diego Costa and Reus team up in the latest FUT 14 TOTW:

These IN-Form players will be available in packs from 2nd April 6:00PM – 5:30PM 9th April.. You can view this team in the Web App or more detailed at FUTHead.

There’s a new FUT 14 transfers batch live on all consoles! In total there are 372 transfered players in this batch and you can view the complete list here.

The 2014 FIFA World Cup demo is officially out since Wednesday and it’s available on Xbox 360 and PS3 consoles. In case you missed it you can download the 1.6 GB demo from here.  The demo features eight national teams: Brazil, Australia, Côte d’Ivoire, England, Japan, Mexico, New Zealand & United States. You can play matches in Estadio do Maracana, the site of the final game of the 2014 FIFA World Cup or in the Arena de Amazônia. The BRAZUCA (adidas official match ball) will also be available in the demo.

The 2014 FIFA World Cup game will also feature new skills and celebrations and you can learn how to perform them thanks to the next clip:

In case you wondered what songs will be featured in the game, EA Sports released the full playlist on Spotify:

The last thing we have for you are the best FIFA 14 and FIFA World Cup 2014 game related articles of the week: