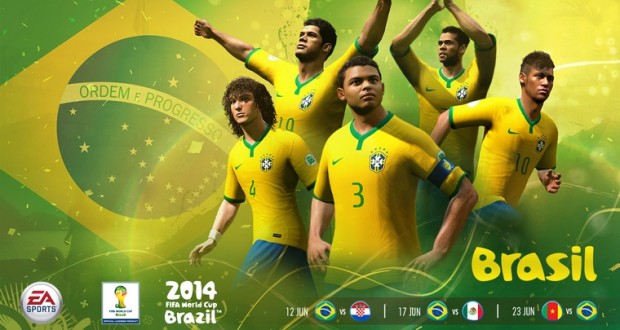 In this week’s post we will feature again both FIFA 14 and 2014 FIFA World Cup game news.

TOTW 31 is out on FUT 14 featuring amazing players like Hulk, Handanovic or Higuain:

These IN-Form players will be available in packs from 16th April 6:00PM – 5:30PM 23rd April. You can view this team in the Web App or more detailed at FUTHead.

This Easter you can play a new tournament in FUT 14 called Eggcellent! There are no entry requirements for this tournament and if you win it you will get the next rewards:

The offline difficulty is set to PROFESSIONAL!

Gareth Bale got the latest MOTM card in FUT 14 thanks to his performance in the amazing win of Real Madrid over Barcelona in the Spanish Cup final this week.

Brazilian legend Romário is in this week’s FUT Legends Spotlight! This week is your best chance to find him in packs all year!

And we wrap up the FIFA 14 news with the official best goals of the week #25 from EA Sports:

Let’s pass to the 2014 FIFA World Cup game news! As most of you know the game was released in stores this week and we have some gameplay clips for you as well a bunch of wallpapers and new in game screens!

Bellow you can view gameplay footage from the game thanks to para182x (be sure to check the whole playlist):

In case you want to see how the 2014 World Cup stadiums look in game you can check the next screens in HQ size:

In addition to the stadiums screens above, EA also published 8 new gameplay screenshots:

Thanks to EA Sports you can now customize your desktop with a set of amazing wallpapers from the World Cup 2014 game featuring the next national teams: England, Brazil, Australia, France, Germany, Spain, Mexico and USA. You can download the wallpapers in various resolutions here.

For reviews of the game please check the next links:

– That’s it for this week too! See you next week with more FIFA 14 news.