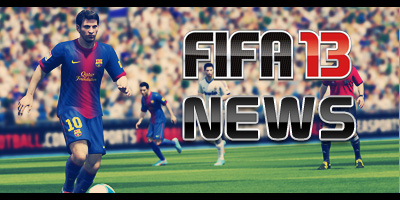 This week’s FIFA 13 news are in! Check out the latest updates down bellow:

The delayed patch has finally been released by EA Sports last friday! If you still didn’t get it be sure to go to your FIFA 13 game and “Check for Updates”. With the delay the dev team took the opportunity to fix more issues as they said in their latest statement:

“We apologize for the recent delays in the FIFA 13 Title Update due to the discovery of a knock-on issue. We’re happy to announce that the update is now available on PC, Xbox 360 and PS3. The delay since our last announcement has allowed us to take the opportunity to address additional items found during testing and raised by the community over the last few weeks. Those items have been added to the list below.”

And here is the list of the issues that have been fixed:

• Fix to improve stability across all online game modes
• Stability in EA SPORTS Football Club challenges.
• National anthems will be properly synced with their corresponding national teams.
• Stability when beginning FIFA 13 whilst connected to a social network on console.
• Optimized searching in Seasons and other online modes.
• Connection stability in Online Seasons when finding an opponent, and at kick-off.
• Career Mode freeze while starting a new career with free agents.
• Career Mode hangs when using Game Face.
• Stability in Career Mode when players retire or are being bought back from loan.
• Users will no longer be able to lower difficulty settings in a FUT Seasons match.
• Freeze in FUT Online Tournament HUB on PS3.
• Napoli of Serie A will now have fully authentic kits and crests in FIFA and FIFA Ultimate Team.
• Legacy defending and passing assistance options removed in Pro Clubs.
• Freeze in Pro Clubs Results screen.
• Matchmaking settings in Pro Clubs (with “ANY” and “Match Keeper”) will provide the desired results.
• Changes made in National Squad not properly reflected in Manager Mode screen.
• (PC Only) Freeze while retrieving Hospitality Settings.

You can play the first half of the season till the end of the year 2012. The 3D mode is also available in the demo. To keep the download size at bay, the demo does not include commentary and most of the original pitches. Exceptions are the Allianz Arena (Bayern Munich) and Old Trafford (Manchester United). In addition, many player pictures and other images such as stadium pictures, 3D heads or city pictures may not be in the demo.

Next we have 7 new screenshots of FIFA 13 on Wii U! The new console is set to release on November 18th in North America and November 30th in Europe. FIFA 13 will be available on the same dates as the console release because FIFA 13 is a Wii U launch title!

If you want to find out more about the FIFA 13 Wii U then check the next articles together with more FIFA 13 related posts:

– FIFA 13 on the Wii U will be the most realistic version of the game, plus an exclusive Wii U feature (WiiUTurn)

– FIFA 14 Wishlist – The Best Of (Footballtainment)

In other news,PSG’s Brazilian superstar Nenê has been chosen as the latest FIFA 13 ambassador!

TOTW 6 has been revealed in Ultimate Team 13 yesterday afternoon! Pick up these in-form players from 24th October to 31st October. You can view this team in-game in the FUT Web App.

Also you can check out the new Superstars of the Week 7 in FIFA Superstars facebook app:

Finally be sure to view the best FIFA 13 goals of Week 3 from EA Sports: