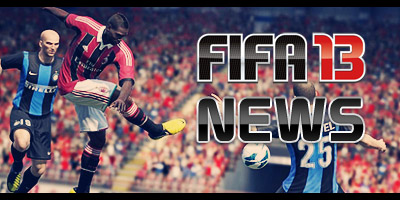 The latest FIFA 13 news are in! Read about the new official patch update from EA Sports, the latest Ultimate Team 13 TOTW and more all down bellow!

Today EA Sports released a new official patch update for FIFA 13. The PC users already got it with Origin while the console users must wait until next week to get the update. Here is the official statement from EA about this patch update:

“In our effort to continuously improve the EA SPORTS FIFA franchise, today we have released an update for FIFA 13 on PC. Available for download now, please see below a list of items that have been addressed in this update. The console (PS3 & Xbox 360) updates will follow in later days; follow us on Twitter @EASPORTSFIFA to stay informed on any future updates.

In today’s update, we addressed the following:
– Guest Play as an option in FIFA 13: Ultimate Team
– An error when trying to access Pro Clubs
– An issue to reduce disconnects to the EA Servers and in EA SPORTS Football Club while in menus or gameplay
– An issue in Creation Centre where some licensed kits were displayed incorrectly.
– Disconnects while viewing FUT Auction House search results
– Snow will again be a random weather option in Pro Clubs

We hope those affected by the above issues will be able to enjoy the full FIFA 13 experience. And once again, thank you for your patience and feedback.”

The addition of the Guest Play option in FUT13 was a high demanded request from the community and EA took care to add it with this official patch. Also many bugs and known issues have been patched and fixed.

In this week’s episode of The Boot Room you will learn how to create a custom set-piece corner.

Team Of The Week 21 is also out on Ultimate Team 13 featuring the next IN-Form players:

Sissoko has switched from CM to CAM

Mertens has previously had an IF release.

You can get these in-form players from 6PM GMT on 6th February – 13th February. View this team in-game in the Web App.

– Next-Gen FIFA On The Horizon? (FSB)

– How to Earn FIFA 13 Ultimate Coins with Packs (FIFAUTeam)

– Ea Create a special IF Card for Danny Guthrie (FIFAMonster)

Finally, if you want to enjoy some nice goals be sure to view the next clip with the GOTW15 from EASports: