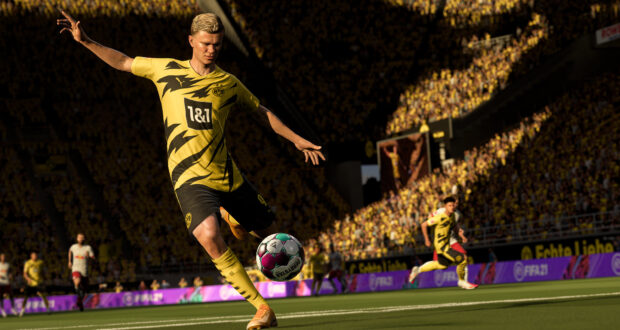 With the worldwide release of FIFA 21 next-gen last week, EA Sports announced today the release of the first title update for FIFA 21 on the PlayStation 5 and Xbox Series X|S addressing various issues across the game. This update release also means that the current-gen version of FIFA 21 and the next-gen version will receive separate updates from now on.

Here’s the full changelog on the update:

– Sometimes, player gesture animations would occur in inappropriate situations when a defender was defending in their own box against an attack.
– In rare instances, when celebrating a goal with a cameraperson, an incorrect scene could be briefly seen.
– The Player Rating would sometimes take too long to update after a player scored a goal.
– In rare instances, a goalkeeper would perform a diving save animation earlier than intended, followed by another diving save.
– The initial save animation did not impact the following save animation.
– In some situations, a requested goalkeeper throw could result in an own goal if the pass was aimed at a receiver too close to the goal.
– In rare situations, a collision between the goalkeeper and the opponent’s player could have resulted in the goalkeeper being knocked into the goal with the ball, resulting in an own goal.
– These instances will now be treated as fouls.
– When a foul occurs which would result in a yellow card, but it is not granted due to the referee calling for an advantage, the offender could commit another yellow card offence and be shown a straight red card by the referee.
– The Bridge Skill Move could not be performed when playing with specific button remappings.
– Following a pass by the goalkeeper in the Advanced Practice scenario, the user could lose control of the player.
– In some House Rules match types against the CPU AI, the in-game difficulty level did not match the selected setting.
– Increased the distance that a ball can travel after making contact with the foot or leg of the defender during a blocking animation.
– Sometimes, Skill Moves were not being performed if they were immediately requested after the ball carrier finished turning.
– In rare instances, a player could pause a match immediately after another player’s set piece.
– Addressed some cases of user controlled players performing an automatic lunge animation while the Pass Block Assistance setting was set to Off.
– Sometimes, shoulder challenges and seal outs could result in unexpected player movement for the defending player.
– Sometimes, defenders could stretch their legs higher than intended when performing a blocking animation.
– Addressed various visual only issues during some post-match relegation and promotion playoff scenes.

– After claiming FUT Coins from Team Event Objectives, the overall FUT Coin total did not increase until FUT was exited and re-entered.
– The correct amount of FUT Coins was being claimed, this issue only impacted when the display of the overall total would increase.
– A returning rewards popup incorrectly displayed when starting FIFA 21 for players who have already played FIFA 21 on an older console within the same console family, and who had already claimed the referenced rewards.
– These rewards are not intended to be claimed more than once.
– Some My Stadium customization changes were not saving correctly if the player viewed the screen multiple times during the same session.
– When switching between Confetti and Fireworks Items in My Stadium, some visual corruption could occur in the middle of the stadium.
– Addressed an instance of the Player Positions not accurately updating when switching formations on the Squad screen.
– Loan Player Items did not display a loan indicator icon on the Season Progress screen.
– When trying to access the Objectives screen through the button shortcut on the Team Event screen, after the Team Event finished, an error message would appear and the game would transition to the FUT menu.
– The Community Tab incorrectly referred to Tiers as Levels.
– When equipped, the Iceland Anthem Item did not play during pre-match scenes.
– When returning to the FUT menu after viewing an Objective that was close to expiring, the Time Remaining counter and Take Me There button shortcut were sometimes not displaying.
– Updated FUT Pack art on the RIvals Mastery Objective.
– Button sound effects did not trigger in the Co-Op Lobby and the Co-Op widget.
– Adjusted the background of the FUT Store tile.
– Stability issue when using the View Player Info button following a Co-Op match.

– After recalling all Scouts on the GTN, a confirmation window could incorrectly appear.
– On the Budget screen, Transfer sums did not count towards the Players Purchased number when the transfer was done outside of a Transfer Window.
– When exiting the Weekly Schedule screen, the player would be taken to an incorrect screen.
– When entering a match through the Interactive Match Sim, Player Lock would become unavailable.
– Addressed some instances of News items not displaying correctly.
– When entering a match after half of it has been Simulated, the in-game camera would be zoomed out unintentionally.
– Made the Schedule Rules easier to view while on the Weekly Schedule screen for Training.
– Acquiring a player through a player swap transfer was not tracking against the appropriate Board Objectives.
– Youth Scouts were sometimes finding similar numbers of highly rated and high potential players regardless of the country that they were scouting.
– In some instances, the incorrect Board Objective was being set for the UEFA Champions League.
– It was possible to view unscouted players OVRs through the Import Team Sheets screens.
– Post match screens would sometimes indicate that a team won a two-legged fixture via away goals when they actually won via penalties.
– Following a pass by the goalkeeper in the Advanced Practice scenario, the user could lose control of the player.
– A stability issue could occur when playing with Argentine teams.
– Addressed stability issues which could rarely occur during Post Match Interviews.

– Following a match with 3 or more user controlled players, on the Match Result screen, “My Stats were not calculated correctly if another player left the match before kick off.
– Addressed some instances of players being unable to matchmake.
– Drop In VOLTA SQUADS lobbies were not correctly disbanding after dropping below the minimum number of players.
– When cycling through views in the My Squad screen, the Avatar portraits could display an incorrect background, making it hard to read the information presented.
– When entering VOLTA FOOTBALL, the News tile was not automatically selected.
– When switching between tabs in Gear Up, the UI did not always reflect the currently selected Objective.
– In some instances, the post match Event Progress screen would incorrectly state that there were two or four Captains on the same team, instead of one.
– Avatar Face Morphing customizations were not always saved.
– In VOLTA Squads, the VOLTA COINS and growth bonuses that you get when playing with Friends were not applied to every player when playing with invited teammates.
– Updated the UI in VOLTA Squads to allow players to see the following:
– Active Event’s Division and Rank from the VOLTA Squads HUB.
– Rewards that are available in the active event.
– Placement Matches information until the player has completed the 5 matches.
– [PlayStation 5 Only] Updated an instance of placeholder text appearing unintentionally.
-[Xbox Series X|S Only] When inviting a friend to a Match Lobby, some visual corruption could have been present on screen.
– A stability issue could occur during VOLTA SQUADS Placement matches.

– Group, Team, and Camera celebrations can now be performed.
– The camera will now slightly zoom towards the goalscorer when celebrating.

– An incorrect OVR could display for Center Forward Virtual Pros in some circumstances, depending on the Virtual Pro’s height and weight.
– After winning the Mystery Ball Cup, the trophy would float during post-match celebrations.
– In a specific instance, a confirmation window was not appearing when making Custom Tactics changes.

– In rare instances, a match could load without the appropriate textures.
– Updated some album art in EA Tracks.
– The FIFA Playtime Help button callout did not display the requested help message.
– Updated lighting during the scene that plays when starting FIFA 21 for the first time.
– Updated several celebration scenes.
– Addressed a camera positioning issue that could occur in Benteler Arena.
– A potential stability issue affected by the in-game Friends List.
– In Online Seasons, the in-game Substitution selection was not always the same as the pre-game Team Sheet.
– Some button callouts did not display correctly within a pop up.
– Addressed various visual only issues during some post-match relegation and promotion playoff scenes.
In some House Rules match types against the CPU AI, the in-game difficulty level did not match the selected setting.
– Updated several instances of unintentional placeholder and incorrectly formatted text.
– When performing Cristiano Ronaldo’s signature celebration, other players would use his voice sample.
– Addressed several potential stability issues.

– When a previously locked Objective group is unlocked, it continues to display as locked until the player exits and re-enters FUT.