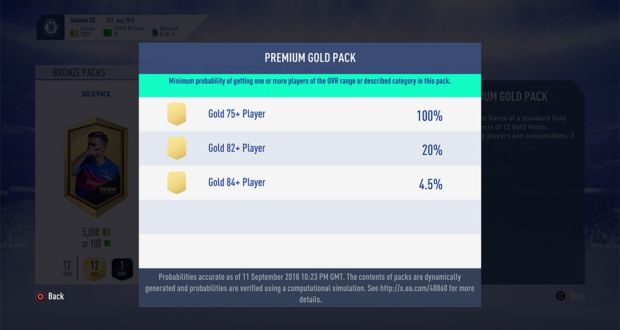 Starting at launch, FIFA 19 will begin displaying pack probabilities, which will detail the likelihood of what you will get in every pack that you purchase. 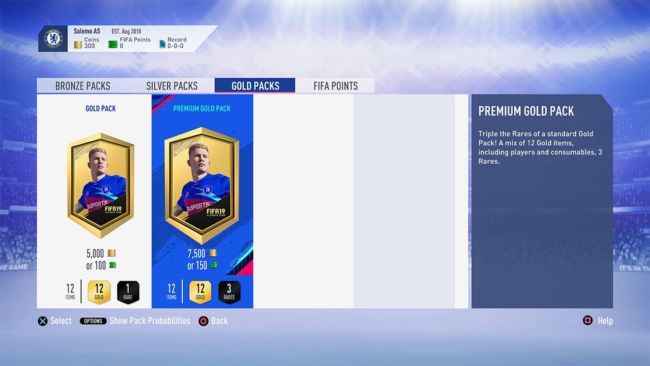 On the FIFA 19 Ultimate Team Store screen, you’ll get an option under every pack available for purchase that reads “Show Pack Probabilities.” Because there are thousands of player items in FUT, they are categorized by item type and rating. The percentages that you see are the minimum probability of getting one or more players in the ratings range and category listed. For example, if a category and rating have a 100% probability, you’re guaranteed to receive at least one item within that category. 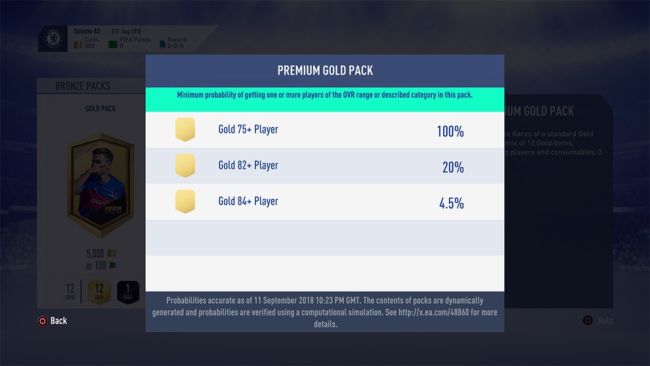 Pack probabilities in FIFA 19 are calculated by simulating the opening of a very large number of packs, for each pack in the Store. The number of packs opened in a simulation varies based on rarity, but it will always be enough to be statistically valid. We then re-run this process with every content update.

Some campaign specific categories, for example Ones to Watch, feature rare content. In some packs, the rarity of this content category may be less than 1%, and within that there will be a wide range of probabilities.

Any probability percentages that you see are on a pack-by-pack basis and are not cumulative. That means that each pack opening is an independent event; opening multiple packs does not change the likelihood of being awarded an item from a specific category. If you flip a coin three times and get heads each time, you still have a 50% chance of getting heads if you flip the coin again.

New items and other live content are always being added to FUT, which could change the probability numbers. Because the probability may change throughout the season, you always have the ability to check the Pack Probabilities screen before purchasing a pack. Probabilities are accurate as of the timestamp indicated at the bottom of that screen.

FIFA Ultimate Team is a live service that we are always looking to improve. This means being open to player feedback at all times. We know all the effort you put into building up your squad, and we want that time to be as rewarding and fun as possible.