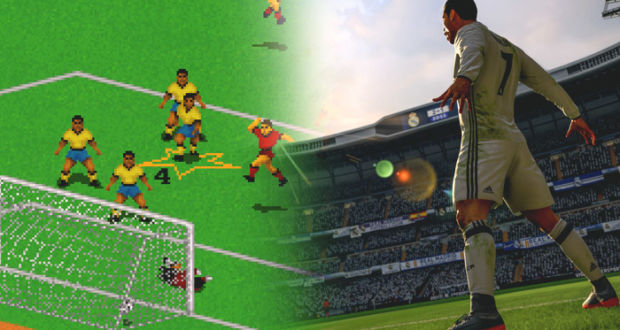 From Pixels to Realism: A Short History of Football Video Games

Football is among the most followed sports at a global scale, with the largest number of fans in the biggest variety of countries, With such a high popularity, football – or soccer, as they call it in the Americas – has spawned an incredible variety of video game versions, from playful casual games to realistic simulations like FIFA 18. This last one is as close to truly playing football as a video game can be – until, of course, a fully immersive virtual reality version of the game is invented. The future looks bright for football simulator fans – now let’s take a look at the past of these amazing video games, singling out some of the most notable precursors to what we have today.

“Soccer“, a team-based arcade game, was among the first successful sports-inspired games released by Japanese developer Taito. Built by Tomohiro Nishikado, made famous by his classic video game “Space Invaders”, “Soccer” allowed players to control two characters – a goalkeeper and a forward. It was followed by several other sports-inspired games, including a collection of sports-based mini-games called “Video Action” by released by Universal Research Laboratories in 1975, that included a football-based title.

The first football manager game was, erm, “Football Manager”, created by Kevin Toms in 1982. Initially released for Video Genie in a text-only form, the game was converted to run on ZX80 and ZX81 powered home computers, and later ported to the ZX Spectrum, with added animated match highlights to make it more realistic (by the times’ standards, of course). The player had to take a team with a randomly selected roster from the Fourth Division to the FA Cup. The game was a true hit, selling half a million copies in its first six years.

The series lived on until the 1990s, spawning several sequels and various editions. At the same time, a variety of other football simulators were released in the same timeframe, especially on Commodore personal computers.

In the 1990s, with the appearance of new-generation gaming consoles, the graphics of the games started to really improve. And so did gameplay – one of the notable games of these years, Taito’s Football Champ, came with the possibility to handle four-player multiplayer action, a variety of kicks, tackles, and even fouling the other players. The first 3D football game, Sega’s Virtua Striker, was also released in 1994, followed by Gremlin Interactive’s Actua Soccer, released in 1995 for the PlayStation.

The first game in the FIFA Series, FIFA International Soccer, was released in 1993 by EA Canada’s Extended Play Productions team. It has exceeded all expectations – despite its late release in December 1993, it has become the best-selling game of the year, with over 500,000 units sold. In the next year, EA started releasing its series on a yearly basis, a tradition that continues to this day.

By the mid-2000s, sports games became big business for developers. EA Sports secured its first major deals around this time, starting with the NFL, and covering basically every other major sports league there is. The FIFA series is one of its best-sellers, localized in 18 languages. To this day, FIFA 12 holds the record of being the fastest selling game ever, with 3.2 million copies sold in its first week of release.

With its increasing popularity, football video games will continue to improve and sell, today’s two main market contenders are EA Sports FIFA and Konami PES. While EA Sports have a fair advantage over their opponents thanks to game modes like Ultimate Team, Konami are catching up thanks to their league and tournament licenses like UEFA Champions League. The next step that both of them will most probably take in the near future is the possibility of merging the Virtual Reality technology with their football games and the first one who will manage to get this technology to work will lead the future of football video games.