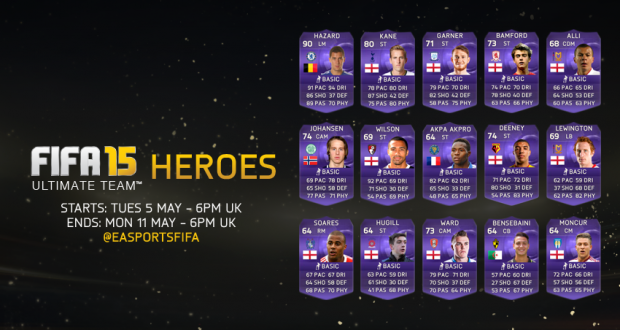 This weekend, Ultimate Team will be celebrating the FIFA community with great promotions, such as:

The three FUT tournaments mentioned above are the following:

A new type of IN-Form card has been introduced in Ultimate Team called Purple Hero IN-Forms and is assigned to players that either won an award for their seasonal performance or helped their club avoid relegation or clinch promotion. The first purple IFs were awarded to the next 15 players:

More Hero IFs from other leagues will be released in the near future similar to MOTM cards which will be available in packs for only 24 hrs!

These in-form players will be available in packs from 6th May 6:00PM – 5:45PM 13th May. You can view the team more detailed at FUTHead or FUTWiz.

Aleix, Rusnak and the magician Messi are now available as orange items in Ultimate Team 15;

This week there were no less than three price range updates in FUT 15! For the lists please check here.

The best FIFA 15 articles and guides of the week column also features an interesting infographic of FIFA 15 that we recommend you to check out:

– IF and UP FIFA 15 Cards: EA’s False Advertisement

– FIFA 15: Have FUT Price Changes been a success?

– The Skilling Dictionary; Everything You Need To Know About Skilling In Fifa Ultimate Team.

We have some serious skills and finishes in Round 20 of GOTW compilation:

Xbox One users can now play FIFA 15 for free thanks to the EA Access Vault promotion. For more details on this please click here.

Really appreciate for checking out this news post! See you next week!