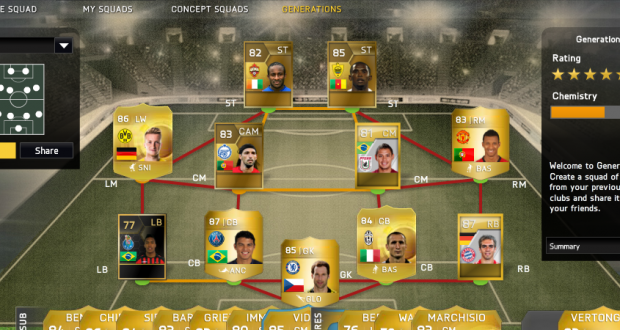 Three weeks ago EA took down the transfer market from the FIFA Ultimate Team 15 mobile game without notice and an official explanation for that decision arrived yesterday:

“In our ongoing effort to balance the FIFA Ultimate Team experience for all players it was necessary to temporarily disable the Transfer Market in FIFA 15 Ultimate Team Mobile.

The increasing volume of fraudulent coin activity in FIFA 15 Ultimate Team Mobile and the methods used to conduct this activity placed a heavy burden on the market across all platforms including mobile and console. We’re working on a solution right now to re-enable the Transfer Market for the mobile game, with a change to user access options. “

EA Sports reassured that more updates on this matter will follow the next week.

The Generations feature has been re-introduced on the Ultimate Team Web App and now you can build squads with players from FUT 10 to FUT 15 and share them with your friends!

TOTW 30 is one of the best TOTW released this season featuring a bunch of astonishing IN-Forms:

These in-form players will be available in packs from 8th April 6:00PM – 5:45PM 15th April. You can view the team live on the Web App or more detailed at FUTHead or FUTWiz.

Five new players have joined the orange MOTM club thanks to their performances this week! The players are: Ibrahimovic, Lulic, Pereyra, Kehl, and Sammaritano.

Time to use those German players from your FUT club and participate in the “Dream Crushers” tournament that comes with some really nice rewards:

Last week we had to skip the best FIFA 15 articles column because we lacked material but this week we don’t:

– EA: How to Not Deal with the FIFA Community

Valencia CF are back with another Player Tournament video, this time on the stage we have Dani Parejo and Antonio Barragán facing Paco Alcácer and José Luis Gayà. Want to find out who qualified for the next round? Simply view the next clip:

The lads from the U-21 German National Team had a blast last week before their friendly game against England by competing in a FIFA 15 Player Tournament hosted by EA Sports:

And to end this news post here’s a new round of GOTW:

That’s everything for this week guys! Next week the first FIFA 16 news will roll out so stay tuned!