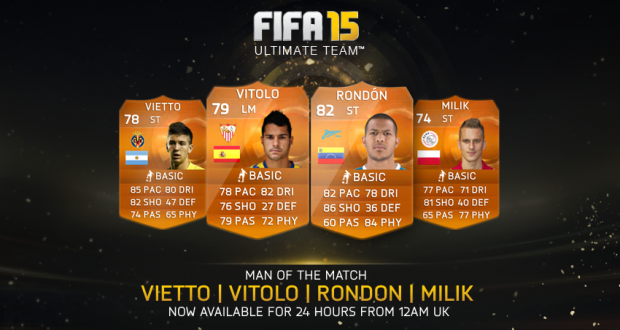 The FIFA 15 Companion App got a small update released this week which included the next features:

Remember that you can get the FIFA 15 Companion App for free from the Apple Store, Google Play Store or WP Store.

These in-form players will be available in packs from 25th February until 4th March. You can view the team in the Web App or more detailed at FUTHead or FUTWiz.

Five amazing MOTM cards have been released in packs after the European midweek matches from Champions and Europa League with Luis Suarez, Rondon, Vitolo, Vietto and Milik earning themselves the orange card in FUT 15:

In case you didn’t notice there’s a new tournament in FUT 15 called Nations Cup that will challenge you to create a hybrid squad of at least four different national teams. For all the tournament details please check bellow:

See what we’ve managed to find on the web for our best FIFA 15 articles and guides of the week column:

– Fast break options and how to defend it (analysis)

– The Many Attacking Options in FIFA 15 (analysis)

– Changing your Controls to help you Defend Better

– FIFA 15 Investments for the Week

Best GOTW #12 compilation from EA Sports is out on YouTube since last weekend, if you missed it you can watch it here:

Thanks for reading this week’s news! See you next week!