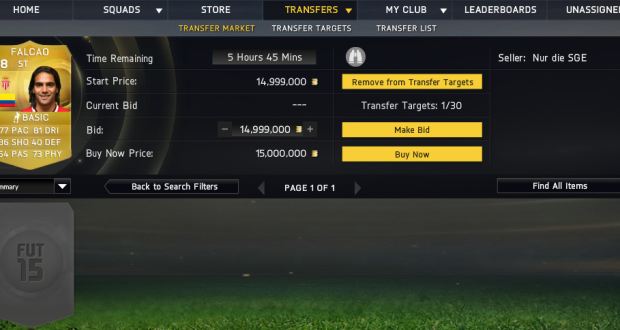 The FIFA 15 Christmas TV commercial was released yesterday with Messi and Hazard going head-to-head in a match of FIFA 15:

On December 11th, EA Sports will initiate the #15DaysofFIFA social giveaway campaign with amazing prizes for everyone that follows them on Facebook, Twitter and Instagram! The campaign will end on December 25th.

Also, from December 19 to January 2, special #FUTmas pack offers and tournaments will be available every 24 hours in Ultimate Team 15!

Decent TOTW this week with IF Clichy, IF Huntelaar and IF Vela:

These in-form players will be available in pack from 3rd December 6:00PM – 5:30PM 10th December. You can view the team in the Web App  or more detailed at FUTHead.

If you’re a FUT 15 player, this weekend you can participate in the Sinterklaas Cup or the MLS Cup:

If you win a match in the MLS Cup tournament you will enter in a contest where you will have the opportunity to win a trip to the 2015 AT&T MLS All-Star Game next summer. For more details about this contest please check here.

Earlier this week many FUT players were dazzled to see Negredo, Falcao and Remy’s cards on the PS market available on their previous clubs with Negredo at Manchester City, Remy at QPR and Falcao at AS Monaco. All three cards were listed on the market by the same user and got himself millions of coins from their auctions. Many thought that the user either managed to find a glitch in the game or hacked the FUT database to get these sort of cards but eventually the user himself explained that his FUT account got corrupted and lost everything he had and the EA Sports compensation team restored his account with these three players before the 2014 Transfer Deadline Day when Negredo, Remy and Falcao didn’t joined their current clubs.

Liverpool’s left back Brad Smith got his Pro Player card in Ultimate Team 15 last week making him the 16th owner of such card in the game!

In this week’s news post I’d like to introduce you to a very interesting concept called FIFA Ultimate Team Stock Exchange 100 or shortly FUTSE 100. This concept, created by FIFA youtuber SpencerFC , ranks all the players in FUT based on their performance, not on someone’s personal opinion or recommendation, instead everything is based, as SpencerFC says, ” on cold hard statistics “! The main idea is to take a specific player from the game and based on his goals and assists over thousands of matches, he gets assigned a specific ratio points value. That value will determine the player’s position in the ranking system which can vary from the best strikers in FUT, the best silver midfielders or the best bronze players. If you still didn’t got the idea behind this concept, please check the introduction video of the FUTSE 100 youtube channel:

You can check all the videos on the FUTSE 100 channel right here!

Another fine collection of FIFA 15 articles and guides are available in this week’s news post:

EA Sports published the 2nd episode of their FIFA 15 Tutorials series in which you will learn how to master the Top 5 Beginner Skill Moves:

See you with more FIFA 15 news next week lads!