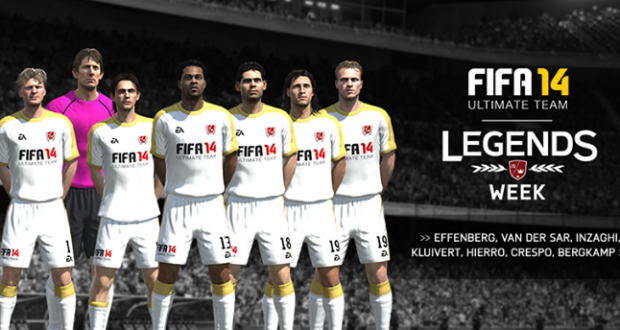 EA announced today on their FB page that in this week’s FUT Legends Spotlight there will be will 7 legends instead of 1! Effenberg, Van der Sar, Inzaghi, Kluivert, Hierro, Crespo and Bergkamp will take the Spotlight and with it your best chance to find them in packs all year!

Two weeks ago we’ve talked about the PlayLikeALegend competition were you can participate by sending in-game clips of goals scored by you depending on the challenge of the week. Well the first 2 challenges have already been won and the other two are still open for entries. The four finalists of the weekly challenges will compete for the FUT Ruud Legend item, a bonus Legend item, an Xbox One, EA SPORTS™ FIFA 14, 1 million FUT Coins and an exclusive Legend shirt! Do you have what it takes to win this competition? Then be sure to submit your goals!

The competition is available only for Xbox One players from UK, Germany, France and Spain!

Ibrahimović, Giroud, Sturridge. It’s a MONSTER Team of the Week in FUT 14:

These IN-Form players will be available in packs from 26th February 6:00PM – 5:30PM 5th March. You can view this team in the Web App or more detailed at FUTHead.

As usually bellow you can find the best FIFA 14 related articles and guides of the week:

And here you can view the official Best Goals of The Week #19: