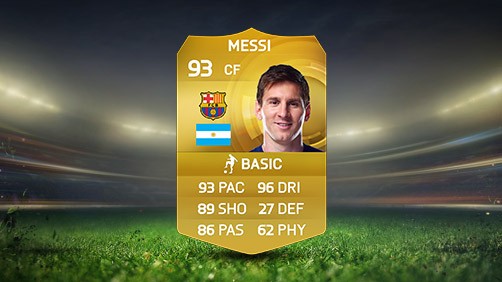 For those who play FIFA Ultimate Team 15 on their iPhone/iPad, a big update was released a few days ago for the game that also includes the support for the much discussed Apple Watch device. Check out the new features:

• Apple Watch – Manage your top 5 player transfers and get instant notifications right on your wrist.
• Best Line-up Option – Sets custom parameters to help you build the best team with the players you have. It’ll even automatically let you know if there are players in your club that are better than your current lineup.
• Simulation Mode Improvements – Your unlocked balls are now shown, instead of a generic type. Plus, your custom Boosts and Tactics now reflect in Sim Stories, with better feedback to help you make the best decisions.
• Extra Help – Look for a button in squad screen to re-display tutorials.

Last night the Xbox FUT market was flooded with Loan Legends cards and immediately it was thought that someone managed to find some sort of glitch to list loaned players on the market. Not long after EA Sports arrived with the explanation:

However due to an error on our part, these Loan Legends were granted as tradable, which is why you may be seeing them on the Transfer Market.

These Loaned Legends won’t be removed from the game, remaining in FUT Clubs and the Transfer Market until their loan contracts end. Sorry for any confusion this may have caused. ”

Can’t even imagine the look on the people who bid on these players and found out later that they can only use them for 4/5 matches.

Chelsea’s star player Eden Hazard finally gets his first IN-Form card of the season as part of TOTW 32:

These in-form players will be available in packs from 22nd April 6:00PM – 5:45PM 29th April. You can view the team live on the Web App or more detailed at FUTHead or FUTWiz.

Two new FUT tournaments are lined up for you this week:

With the 2nd legs of the European quarter-finals finished it was inevitable to have these many MOTM cards released in Ultimate Team 15:

PlayStation players will be happy to hear that you can now buy FIFA Points directly from the PlayStation Store following an agreement between EA Sports and Sony. The prices remain the same as before and you can simply buy the points from this new catalogue.

Once a month, if you’re lucky enough, you can get a free untradable Messi in your FUT club if you simply opt-in your email address in the contact preferences of your origin account here.

The newest price range adjustments update contains over 800 players adjusted and they are all live in FUT 15 as we speak. Complete list of adjustments can be seen here.

Here are some tips and guides on FIFA 15 that might help you out and a very good podcast interview of FIFA’s community manager Chuboi:

– Wanted FC: The Extinction of the Best FIFA 15 Players

Find out how Harry Kane and Ryan Mason got on when they were challenged to a FIFA 15 tournament by Spurs fans:

That’s all for this week lads! In the meantime stash some coins in your FUT club because Teams Of The Season are on their way to Ultimate Team 15! In case you’re new and don’t know what TOTS are please check out this guide.

See you next week!