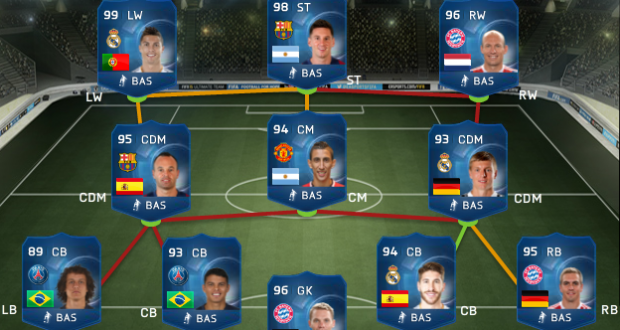 The 2014 Team Of The Year was revealed at the Ballon d’Or gala earlier this week and not long after that the equivelant Ultimate Team 15 cards were revealed as well with some insane stats and ratings:

The 99 rated Cristiano Ronaldo may be the best player in Ultimate Team history alongside the FIFA 12 99 rated Limited Edition Messi!

Currently only the forwards are available in packs but save up your coins and fifa points for tomorrow because all 11 TOTY players will hit the packs for a short period of time.

Beside TOTY, TOTW 18 is also out featuring the King Of Rome himself, Francesco Totti:

These in-form players will be available in pack from 14th January 6:00PM – 5:30PM 21st January. You can view the team in the Web App  or more detailed at FUTHead or FUTWiz.

With the release of TOTY it was inevitable that a tournament dedicated to it will make its way in Ultimate Team:

EA Sports released an update a few days ago for the FIFA 15 Companion App containing the following changes:

The companion app is available for free and you can get it for your iOS, Android or Windows Phone mobiles.

The Ultimate Team 15 app also got an update which included ” a few off-the-pitch enhancements to improve overall gameplay”. You can download the game for free on your mobile from the Apple Store, Google Play Store or WP Store.

As every week, we search far and wide on the web for the best FIFA 15 articles and guides and here’s what we’ve found this week:

– Winter upgrades – what happened last year, what that may mean for this year

– Making the Most of Different Finishing Situations

– FIFA 15: Career Mode can be more fun to play with these tips

Ever wondered what are the best formations to play with in FIFA 15? If the answer is yes then check out the next video tutorial:

Thanks for checking out this news post! See you as usual next week!