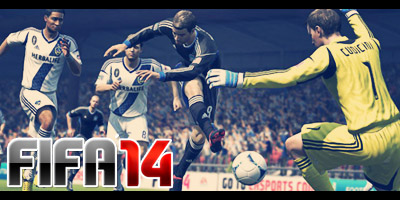 After last week’s FIFA 14 reveal we gathered more interesting news for you:

There are rumors that FIFA 14 will run on Battlefield’s 4 engine called Frostbite 3 after a tweet from the former FIFA community manager, Romily Broad:

With the first FIFA 14 screens revealed I really doubt they switched to Frostbite 3 engine. But who knows, maybe EA will make us a surprise in the months that follow.
Source: MountSpace

EA Sports are holding a playtest of an early build of FIFA 14 in Guildford, UK between April 30th – May 3rd! If you want to participate then please fill up the next survey.

Borussia Dortmund’s FIFA 14 scanning was confirmed a month ago but we didn’t knew what players got scanned until now:

Everton FC also confirmed their FIFA 14 scanning thanks to the next clip from their official FB page:

As an example of how a scanned face looks like, we have a beta preview of Kyle Walker’s new scanned FIFA 14 starhead:

Credits goes to nimnim for the pic!

Credits to AmfdCrossB & Cris-9 for the screens!

Bellow you can view a great video presentation of the new FIFA 14 gameplay features compared to the FIFA 13 gameplay:

Tons of FIFA 14 related articles flood the web this week and these ones are the best out there:

– 5 Things you Need to Know about Fifa 14 (FIFAMonster)

– Your questions to the producer – and the answers … (F4F)

– What Needs To Happen In FIFA 14 (Leviathyn)

Here’s an interview from CVG with the FIFA 14 Producers Sebastian Enrique and Nick Channon talking about the new features in the game including sprint dribbling, finishing and rewarding the player after a mighty build-up:

EA announced their presence at this year’s E3 venue in L.A. Their press conference will air on June 10th, 2013 at 1 PM PDT!

After Sony’s PS4 announcement, it’s Microsoft’s turn to announce their new gen console called Xbox Infinity/Durango. The new console is set to be revealed on May 21st at 10 AM PDT!

If you want to pre-order FIFA 14 you can do it from Origin for £39.99! PS3 and Xbox users can pre-order by checking here.

That’s it for now! See you soon with more FIFA 14 news!